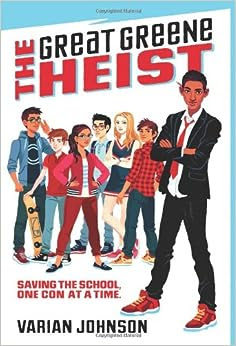 What It's About: Saving the school -- one con at a time.

Jackson Greene swears he's given up scheming. Then school bully Keith Sinclair announces he's running for Student Council president, against Jackson's former friend Gaby de la Cruz. Gaby wants Jackson to stay out of it -- but he knows Keith has "connections" to the principal, which could win him the presidency no matter the vote count.

So Jackson assembles a crack team: Hashemi Larijani, tech genius. Victor Cho, bankroll. Megan Feldman, science goddess. Charlie de la Cruz, reporter. Together they devise a plan that will take down Keith, win Gaby's respect, and make sure the election is done right. If they can pull it off, it will be remembered as the school's greatest con ever -- one worthy of the name THE GREAT GREENE HEIST.

Opening Lines: "As Jackson Greene sped past the Maplewood Middle School cafeteria – his trademark red tie skewed slightly to the left, a yellow No. 2 pencil balanced behind his ear, and a small spiral-bound notebook tucked in his right jacket pocket – he found himself dangerously close to sliding back into the warm confines of scheming and pranking.”

What I Liked: There's been a call lately for #MoreDiverseBooks, and this one definitely fits the bill. As you can see from this eye-catcher of a cover, there is a lot of diversity in this school body.

I really enjoyed Jackson Greene's acumen and intelligence, as he and his crew work to pull off this magnificent con. The author has mentioned one of his inspirations as being Ocean's Eleven, and part of the fun is trying to figure out how this is all going to work. The narrative is fast-paced and I would particularly recommend it to writers studying how to make an omniscient narration work. (As such, you may enjoy Varian Johnson's interview at The Nerdy Book Club where he writes: "I read, and re-read, and re-read again The Westing Game. I studied the mechanics of how author Ellen Raskin slipped in and out of each character’s head;  how she used the narrator’s voice to play with the reader. Her use of omniscient perspective became the blueprint for the novel.")

This novel has gotten a lot of buzz, and I think it is richly deserved. I can see this as being a hit with middle grade readers all across the board!

About the Author (From his website): Varian Johnson is the author of four novels, including The Great Greene Heist, a Publishers Weekly Best Summer Book of 2014. His novels for older readers include My Life as a Rhombus, named to the Texas Library Association Tayshas High School Reading List and the New York Public Library “Stuff for the Teen Age” list, and Saving Maddie, a Bank Street College of Education Best Children’s Book.

Varian was born in Florence, South Carolina, and attended the University of Oklahoma, where he received a BS in Civil Engineering. He later received an MFA in Writing for Children and Young Adults from the Vermont College of Fine Arts. Varian now lives outside of Austin, TX with his family.