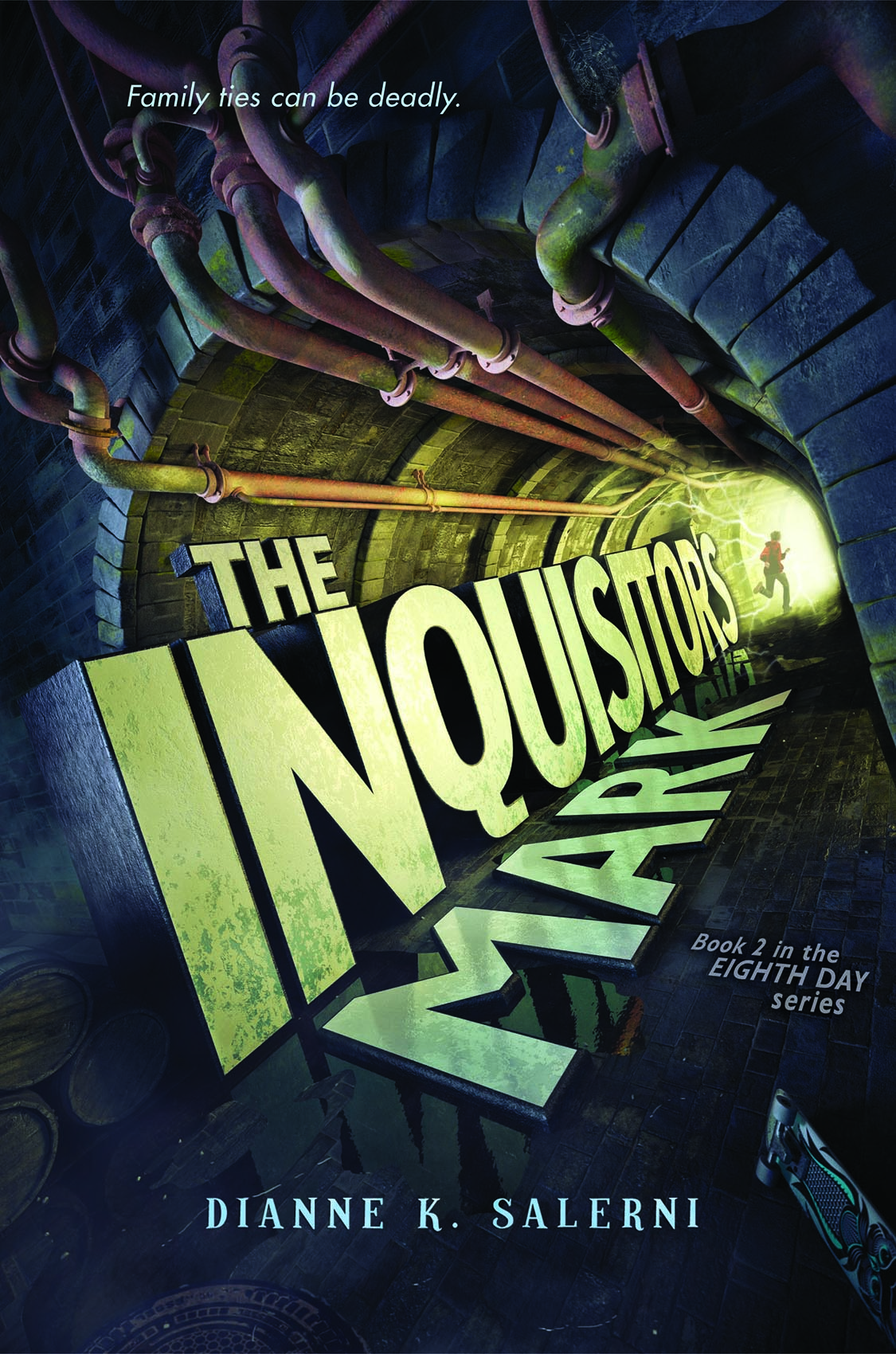 Dianne Salerni is fast becoming one of my favorite middle grade novelists--and I don't just say that because she's a comrade of mine on Project Mayhem (although the Don's all for nepotism.) I adored Dianne's THE EIGHTH DAY, and her sequel was, in some ways, even more gripping. But more on that in a minute!

What It's About: (From Goodreads)
After the all-out Eighth Day war in Mexico, Jax, Riley, and Evangeline have gone into hiding. There are still rogue Transitioners and evil Kin lords who want to use Riley, a descendant of King Arthur, and Evangeline, a powerful wizard with bloodlines to Merlin, to get control over the Eighth Day.


So when Finn Ambrose, a mysterious stranger, contacts Jax claiming to be his uncle, Jax’s defenses go up—especially when Finn tells Jax that he’s holding Jax’s best friend, Billy, hostage. To rescue Billy and keep Riley and Evangeline out of the fray, Jax sneaks off to New York City on his own. But once there, he discovers a surprising truth: Finn is his uncle and Jax is closely related to the Dulacs—a notoriously corrupt and dangerous Transitioner clan who have been dying to get their hands on Riley and Evangeline. And family or not, these people will stop at nothing to get what they want.

Opening Lines:
"Jax Aubrey's phone rang at least once a day, and it was always the same number. Only one person ever called him, wanting to know where he was, what had happened to him, and when he was coming back."

Why I Loved It:
Sequels are hard. You've got to remind readers what happened in Book 1 without bogging down the narrative, and you've got to further the story convincingly. Dianne K. Salerni does a magnificent job on both counts. The narrative is off and running from the start, with Jax's friend Billy trying to contact him, and all sorts of complications set in place as Jax eavesdrops on Riley and hears him say that "Jax has got to go."

Immediately, we are in chapter 2 and in the head of a new character, Dorian Ambrose. Dorian is with his father, watching a prisoner being interrogated. And we learn that Dorian, and his father Finn, are related to Jax! Holy cannoli!!

So that's the set up, and if there's a writer who can write chase scene and battles as well as Dianne Salerni, let me at 'em because they have big shoes to fill. The tension in several scenes (a chase through the New York zoo, and a battle with a magical creature called a wyvern) is truly hair-raising. I defy anyone to put this book down for a second. In fact, I was getting at 5 a.m. to read it before my kids woke to get ready for school.

Then there are Brownies with tunnels. You've got to read this book to find out about all that!

Finally, a shout out to the artist who designs the covers of this series. I'll let the Don have the last word: Bellissimo!

About the Author: (adapted from her website)
Dianne K. Salerni lives in Chester County, Pennsylvania with her husband Bob, her two daughters, Gabrielle and Gina, and her trusty dog, Sorcia. (Plus — new in September 2014 — Luna the kitten!) She taught fourth and fifth grade for 25 years.

Now, instead of teaching, Dianne writes, blogs, and chauffeurs her daughters to their various activities. She spends her free time hanging around creepy cemeteries and climbing 2000 year-old pyramids in the name of book research.

Dianne’s first novel, We Hear the Dead, is a YA historical based on the real story of 19th century teenage spirit mediums Maggie and Kate Fox. Her second novel, another YA historical, The Caged Graves, is a Junior Library Guild Selection and was inspired by two real caged graves in an abandoned Pennsylvania cemetery. Her debut book for children, The Eighth Day, released in 2014 to critical acclaim and is the first in a planned fantasy series. The second book, The Inquisitor’s Mark, is due out in January. (editor's note: And it's here now!)

I loved THE INQUISITOR'S MARK so much that I'm buying my own copy. Which means I have my gently loved ARC to give to one of you good people. Just holler in the comments section and the Don will choose one lucky winner out of his fedora. Ciao!