Holy Moly!  Alerted this morning by a tweet from the great Krista Van Dolzer, I entered The Writer's Voice, and the bot picked me. Now, if it would just pick me some winning lottery numbers, I could retire from this malarkey and make my home in the Canary Islands. (The Don, by the way, is all over this. He thinks I've won The Eurovision Song Contest. I'm not disabusing him--as long as I don't have to wear sequins.)


Dear Ms. Awesome-Agent,
Twelve-year-old Nita Adams desperately wants to see a ghost. After all, she’s president of the Friday Night Fright Club and an expert in all things paranormal—and she needs her friends to focus more on phantoms than on sports and boys. (As if boys could ever compete with banshees or bhoots—Indian ghosts with backward facing feet!)
To make matters worse, there’s trouble with the new girl in school. Destiny claims to be a REAL summoner, and she appears to be taking over Nita’s friends’ minds. Nita rises to Destiny’s challenge, and the race to see who can summon a spirit is on. Ouija boards, spell books, magical lockets, and sneaking into “haunted” houses are all part of the duel.
However, as Nita discovers, some spirits should definitely remain unsummoned. That's because the spirit she unleashes has mayhem and murder on his mind. And if Nita can’t stop him, someone close to her may very well end up dead.
THE FRIDAY NIGHT FRIGHT CLUB is a middle grade ghost story, complete at 45,000 words. I like to think of it as being a bit like Heather Vogel Frederick's Mother-Daughter Book Club series--if the only books the girls ever wanted to read were Goosebumps. I'm querying you specifically because (xyz etc.)
I belong to the SCBWI, and am active in children's literature circles, managing the group blog Project Mayhem: The Manic Minds of Middle Grade Writers. For the past three years, I have also judged middle grade fiction for the Cybils’ awards. Originally from England, I now live in Portland, Oregon.
Thank you for your time and consideration,
Michael Gettel-Gilmartin

The skull gleamed in the dim light of the battery-powered votive candles. Wisps of fog snaked through its empty eye sockets, and its yellowing teeth grinned as it faced one bedroom wall and then another. For a moment, it trembled in Nita’s ’ hand. Then it swooped down and smacked the seventh-grade social studies textbook lying beneath it.
Nita shook the skull a couple more times, for good measure. “I, the Mistress of Graves, call this meeting of the Friday Night Fright Club to order,” she said, in her spookiest voice.
As if on cue, the wind roared through the fir trees in the ravine behind Nita’s neighborhood. Rain tap-tap-tapped against her bedroom window. Wouldn’t it be awesome if the tapping was the sound of a ghost, desperate to return to a previous life? Nita would race to the window and let the lost spirit in.
She had to admit it: October in was totally her favorite month. Tonight, in honor of Halloween—only a couple of weeks away—she was doing everything in her power to amp up the fear factor. It seemed to be working—at least with one of her best friends. Brenny, wide-eyed, looked completely spooked. Now, to complete the mission and terrify Maddie…
Nita positioned the plastic skull in front of her and flung her arms wide. Vapor from the fog machine on her dresser swirled around all three of them. They looked like wraiths.
“I have two words for you,” Nita said. “Bloody Mary.”
Posted by Michael G-G at 11:11 PM 21 comments: It's been all-go in Mafioso land, what with the eldest mini-maf graduating from high school in less than two weeks; middle mini-maf having just completed a middle school run of The Sound of Music; and mini mini-maf still in mourning because of the Portland Trailblazers defeat in the first round of the NBA playoffs. Also, as my one reader pointed out last week, I am in the midst of querying--having parted ways with my agent in early January. The Don has told me his cousin Alfonso is available and only takes 50% of any deals made, but I'm holding out for better terms (and an agent who actually reads!)

Those of you who know me well, know that I have somewhat of a morbid streak. This manifests especially when an author dies. Immediately after reading their obituary, I want to read all their books--even, nay especially--if I've never heard of them before.

This is what happened with MIDNIGHT BLUE, the absolutely stunning novel by Pauline Fisk, an English author who died in January. Her obituary in The Guardian described her as an author "with a strong sense of place and a rare gift for blending the natural with the supernatural in ways that made the latter seem entirely credible."

Now, I am also a writer who loves to blend the natural with the supernatural. My books are set in modern times, but there's always something a little "off" in the world--objects that allow one to time travel, or ghosts. So I knew I had to read Midnight Blue right away (or at least right after I finished Moby Dick  for my book group.) I wasn't disappointed.

Bonnie, a girl torn between the harsh reality of her mother's weaknesses and her grandmother's strong will escapes her home one day by sneaking into her neighbor's hot air balloon. But instead of flying into the clouds and back down, she lands in another world, something like her own, but both kinder and somehow much more terrifying. She's not sure if she can ever leave this nearly parallel world and return to her own. And if she did, she isn't sure she'll be able to bring back with her the sense of warmth and love she has grown to cherish. Amazingly, she does both.

Opening Lines:
"It began as it always did with sweet, solitary notes of music that called to her from somewhere beyond the sky, a single piper's cry that reached down for her and scooped her over the roof tops and streets, office blocks and electric pylons, railway stations, shops and parks."

Why I Loved It:
As I mentioned above, Fisk's world is a recognizable one, but one that is suffused with magic. Her writing is lyrical, and her sense of place is extraordinary. Here she is, describing the hill in which Bonnie has landed with her balloon:


"The holly grove was ancient. The trees were twisted and dark, their branches tortuous. They formed a dense, gnarled ring with a large grass-and-moss clearing in the centre. You slipped into that ring and it was as if you'd entered another world....Long strands of fleece hung like listless washing on a line. Last dots of pink foxglove wilted in their shade."


There is also great suspense, because the people who inhabit this parallel world are people who Bonnie recognizes. Dad is like her neighbor, Michael; Mum is like her own mother, Maybelle; and Arabella is like Bonnie herself. Into this world comes the figure whom Bonnie fears most, her domineering grandmother, whom she calls "Grandbag." This new manifestation of Grandbag--Grandmother Marvell--has a magic mirror which can suck out a person's soul and leave them as a husk, a weird approximation of themselves. The novel ventures into dark places--literally!--as Bonnie and her friend, Jim, the shadow boy, try and outwit Grandmother Marvell and rescue Arabella from a horrible fate in the mirror.

This novel will stay with me for a very long time, and I look forward to reading more of Pauline Fisk's work.

About The Author:
Pauline Fisk was born in London in 1948, and moved to Shropshire with her husband, David Davies, in 1972. She wrote 11 books for children, including Midnight Blue and Sabrina Fludde (2002), often considered her most ambitious work. As she said of herself: “My whole life has been spent trying to bring together real life and the world of fantasy, in particular by finding new and interesting ways of expressing a sense of the magical in my writing. Ever since I was five years old, hunting down fairies in the back alley behind my parents’ house, a sense of more to life than meets the eye has been part of who I am. When I was a child, life was one big fairytale. That was how I felt. But how to get into that fairytale?”

Pauline Fisk had three daughters and two sons. She died on January 25th, 2015. Over at Project Mayhem today, featuring Tara Dairman's THE STARS OF SUMMER

I've been neglecting Middle Grade Mafioso horribly--mainly because I'm currently querying agents as well as cracking the whip as blog manager over at Project Mayhem.

Speaking of which, Project Mayhem is last stop on Tara Dairman's The Stars of Summer Blog Tour. 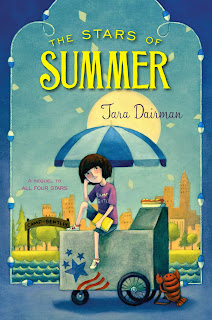 As I say in my review, it's hard to get a grizzled old Middle Grade Mafioso to laugh. (Tears are a different story. I'm getting much more lachrymose in my old age, when I think of the vicissitudes of life.) But reading The Stars of Summer, I laughed a lot. Knowing, as I do, how much kids this age are into cooking shows, I'm betting that Tara has another hit on her hands.

If you're so inclined today, hop on over to the Project to say Hi!
Posted by Michael G-G at 3:30 AM No comments: