THE EXPLORERS:THE DOOR IN THE ALLEY by Adrienne Kress (Penguin Random House, April 25 2017)

The Don and I have been busy blog-touring this week--and we are thrilled to have been included in Adrienne Kress' tour. The Explorers has got it all: winning characters, frightening antagonists, and an appealing sense of whimsical humor. (Also, one of the coolest covers around!)

What It's About:
Featuring a mysterious society, a secretive past, and a pig in a teeny hat, The Explorers: The Door in the Alley is the first book in a new series for fans of The Name of This Book Is a Secret and The Mysterious Benedict Society. Knock once if you can find it—but only members are allowed inside.

This is one of those stories that start with a pig in a teeny hat. It’s not the one you’re thinking about. (This story is way better than that one.)
This pig-in-a-teeny-hat story starts when a very uninquisitive boy stumbles upon a very mysterious society. After that, there is danger and adventure; there are missing persons, hired thugs, a hidden box, a lost map, and famous explorers; and there is a girl looking for help that only uninquisitive boys can offer.

The Explorers: The Door in the Alley is the first book in a series that is sure to hit young readers right in the funny bone.

Opening Line:
"This story begins, like most stories do, with a pig wearing a teeny hat."

Q & A with Adrienne Kress

I'm a huge Norton Juster fan, and also Judy Blume (of course). And I'm definitely a Harry Potterphile, and so adore J.K. Rowling. I also really enjoy the classics including J.M. Barrie and Lewis Carroll.

Right now I have Mindy Kaling's Why Not Me?, Lesley Livingston's The Valiant, Danielle Younge-Ullman's Everything Beautiful is Not Ruined and Melanie Fishbane's Maud.

3) Pick a favorite scene from your novel, and say why you like it.

Oh, man. That's really tough. I think, though . . . I think one of my favourite scenes isn't exactly a scene, it's more like a montage. It's the sequence where Sebastian gets to know The Explorers Society building and all the amazing rooms and objects inside. I think this is because I just really loved creating the Society and kind of sort of wish it was real and I could live there.  [MGM: It is a cool place!]

...at just being generally awesome :) . Okay, but if forced to choose, I suppose I'm pretty swell at absurdity. I love it so much, mostly because I tend to think the world in general is rather absurd.

5) My breakfast of writing champions is...

Yogurt and fruit, a couple of slices of cheese and English Breakfast tea.

6) If you could visit any place, real or imagined, where would it be?

About the Author:
Adrienne Kress is a writer and an actress born and raised in Toronto. She is the daughter of two high school English teachers, and credits them with inspiring her love of both writing and performing. She also has a cat named Atticus, who unfortunately despises teeny hats. She is the author of The Explorers: The Door in the Alley and The Explorers: The Reckless Rescue. To find out more about Adrienne go to AdrienneKress.com and follow @AdrienneKress on Twitter and Instagram. 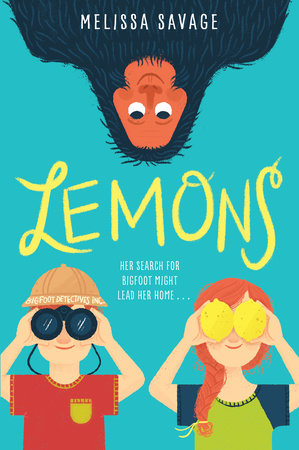 The Don and I are thrilled to be part of Melissa Savage's book tour. Melissa also agreed to answer our patented Middle Grade Mafioso questions so, after you've read about Lemons, stick around to learn more about Melissa!

What It's About (from Goodreads):
The search for Bigfoot gets juicy in this funny and touching story that’s perfect for fans of Kate DiCamillo’s Flora & Ulysses and Katherine Applegate’s Crenshaw!

Lemonade Liberty Witt’s mama always told her: When life gives you lemons, make lemonade. But Lem can’t possibly make lemonade out of her new life in Willow Creek, California—the Bigfoot Capital of the World—where she’s forced to live with a grandfather she’s never met after her mother passes away.

Then she meets eleven-year-old Tobin Sky, the CEO of Bigfoot Detectives Inc., who is the sole Bigfoot investigator for their small town. After he invites Lem to be his assistant for the summer, they set out on an epic adventure to capture a shot of the elusive beast on film. But along the way, Lem and Tobin end up discovering more than they ever could have imagined. And Lem realizes that maybe she can make lemonade out of her new life after all


"Bigfoot.
It's the very first thing I see when we pull into town. A gargantuan wooden statue of the hairy beast, stuck right smack in the middle of the square, like he's the mayor or President Ford or someone real important like that."

I love Kate DiCamillo, Gary Schmidt and Kelly Easton to name a few. I also grew up reading Judy Blume and Paula Danziger, two more favorites. One of my most beloved books growing up was Can You Sue Your Parents for Malpractice? by Paula Danziger.  It was not one of her best known YA’s, but I loved it! That one and her Pistachio Prescription were books I read and reread growing up. It’s a hard question to answer because I’m always finding new favorites. I love going to the book store and finding a gem I didn’t know about. I just did that with Jason Reynold’s, As Brave As You. It should have been on my radar, but it wasn’t and it was just a gem to find. Now I’m a huge fan!

I’m reading Rain Reign right now and I LOVE it! I know whether or not I’m going to like a book by reading the very first page. And this was one I knew I needed to keep reading.

3) Pick a favorite scene from your novel, and say why you like it.

I especially love to write dialogue between Tobin and Lemonade because they are so different. I think it’s fun for them to debate their differences and then have to come to some kind of agreement or compromise. However, one of my favorite scenes is when Tobin and Lemonade come upon the nest out back of Mrs. Dickerson’s house and find Scotty living there. The scene in which Charlie, Debbie, Scotty, Tobin and Lemonade all come to grips with Scotty being alive is so full of all kinds of different feelings all at once. And it also really shows Lemonade’s growth and healing as she reaches for Charlie’s hand just in case he has his own sadness quicksand.

Still being a ten-year-old on the inside, useless Seinfeld Trivia and binge watching cryptozoological reality shows of any kind.

5) My breakfast of writing champions is...

Matcha tea. I start my day every day with a cup of Matcha in my Bigfoot “I believe” mug for cryptozoological inspiration.


6) If you could visit any place, where would it be?

I just took a trip this year to Scotland, my first time overseas and I loved it! I would love to visit England, Australia and Norway. And maybe . . . Cleveland? Just because I’ve never been there.

Thanks so much, Melissa!
For more information about Melissa, visit her website. And if you want to be entered into a drawing for your very own copy of LEMONS, leave a comment to say 'hi.' Ciao!
Posted by Michael G-G at 2:30 AM 9 comments: