Marvelous Middle Grade Monday: We Are Not Eaten By Yaks--and a GIVEAWAY

Greetings! The Don is still basking in all the attention we received for featuring Chris Rylander and The Fourth Stall a while back. He’s even promised me my own gondola when we visit Venice, although there was some subsequent muttering about my predecessor (a “doity rat”) whose gondola developed a mysterious and rapid leak and who is now sleeping with the Venetian fishes. Oh well, that guy never had a blog with which to entertain the Boss! 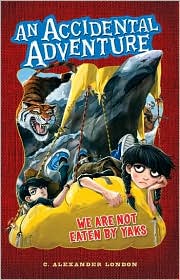 Onwards. It is with great pleasure that I want to introduce you now to the insanely adventurous and hugely talented C. Alexander London. I read his debut, We are Not Eaten By Yaks, to the Don’s grandson, as a cautionary tale about watching too much TV. I caught Grandpa Vito listening in and laughing uproariously.

What is this fantastic book about? Here's the Goodreads blurb: Eleven-year-old twins Oliver and Celia Navel live on the 4-1/2th floor of the Explorers Club with their father, Dr. Navel. Their mother, Dr. Navel, has been missing for years. So when an explorer shows up with a clue as to where his wife could be, Dr. Navel drags Oliver and Celia to Tibet to find her. Once there, the twins fall out of airplanes, encounter Yetis, travel through waterfalls, and end up in the Demon Fortress of the Warrior King where they - just possibly - might find their mother and save their father from the Poison Witches. Thing is, they would much rather be watching television. And if their trip doesn't work out as planned, the twins could end up as slaves to Sir Edmund Thitheltorpe III, an evil explorer with breath that smells like boiled carrots, who has it in for the whole Navel family.
Mr. London has kindly agreed to answer a few questions (and there could be a GIVEAWAY!) So, here we go:

Thanks so much for joining us today, Mr London. I want you to know that all of us at Middle Grade Mafioso HQ loved your novel. The Don is hailing you as another fine Italian writer. Where exactly do you hail from? (And if there’s no Italian link, make one up. I’ve now got a relative called Oleguine Plotnikoffeone.)
CAL: I live in an Italian neighborhood in Brooklyn, and my dog looks a little like Marlon Brando, so I hope that makes me part of the Middle Grade cosa nostra. But I grew up in Baltimore, in the suburbs with a gorgeous lawn that I often saw from the couch during Saturday morning cartoons. I also spent one semester of high school living in Germany. While I was there, I dyed my hair green. My parents were less than thrilled.


MGM: I bet! Hey, I read on your blog that the inspiration for your novel occurred while you were embroiled in a street protest in . What were you doing there, and what actually happened?
CAL:
I had just left my job as a young adult librarian with the New York Public Library and was in Burma as a freelance journalist (secretly, I didn’t have a visa to be there as a journalist-they never would have given me one) when the largest pro-democracy protests in 20 years broke out. Hundreds of thousands of Buddhist monks all over the country were demanding better living conditions for the people. As the protests grew, people started to demand more freedoms and the release of political prisoners. It is a military government and the people don’t have very many freedoms. The government didn’t like being protested so they turned their troops on their own people—especially on the monks—and things got scary. They cut off all communication with the outside world and banned journalists. I spent a day stuck in a friend’s apartment with nothing to do because they’d cut off all foreign TV. Basically, all I could watch were Burmese soap operas, which are incomprehensible to me. And I think, also, perhaps to Burmese people.
I left the country the day before things got really violent, and while I was on a flight out of the country, I had the idea for Oliver and Celia Navel, two kids who were having the adventure of a lifetime, but really just wanted to be left alone to watch television. I wrote it down in a little notebook and started writing the story almost the moment I got home (actually, I adopted a dog the moment I got home, then started writing…that’s another story).

MGM: Speaking of stories, you wrote a really great one. Oliver and Celia Navel, the heroes of We Are Not Eaten by Yaks, are addicted to television. (I love the shows they watch: “Ten Ton Taco Challenge,” and “Love at 30,000 Feet.”) Their parents, the Drs. Navel, are world-famous explorers. Are you more Oliver Navel (TV-lover) or Dr. Navel (pith-helmet wearer)?
CAL:
I am a little bit of both. I’ve been lucky to have a lot of adventures all over the world and also unlucky enough to have had them. Adventures are basically a sign that something has gone wrong. When things are running smoothly you don’t have any adventures. But when a volcano erupts on the city you’re in on your 22nd birthday or you get strange bite on your little toe in the jungles of Thailand (both of which happened to me), things get exciting. I prefer it when they don’t get exciting. I really like my sofa and my TV and my peace and quiet. So I am Oliver and I am Dr. Navel. But also, Dr. Navel is based on my father, who always loved to drag me away from the TV when I was little to have adventures of our own.
MGM: My kids probably think I'm Dr. Navel too.
Now, gunslinging lamas, yetis, yaks, and Poison Witches all make an appearance throughout the novel. Your next novel promises cannibals, plus exploding snack cakes and a life-or-death dodgeball game. (I can’t wait!) When is the release date for We Dine With Cannibals? And are there any other books planned in the series?
CAL:
We Dine With Cannibals goes on sale on November 15th and I encourage your readers to purchase at least a dozen copies each from your favorite bookstore. Happily for us, and unhappily for Oliver and Celia Navel, there are going to be a total of four books in the series. I am actually writing the last one right now and can’t tell you much more than that, except that you have giant squid, killer wedgies, pirate chickens and perhaps a polar bear or two to look forward to in the coming books. Also, a teenaged celebrity with a reality TV show.
MGM: I would so love a pirate chicken! (Oliver and Celia can keep the killer wedgies, though.) Okay, final question: since Chris Rylander started our MGM interview series off last month in a cereal-loving vein, what is your favorite breakfast? (Hopefully not yak butter and barley flour!!)
CAL: Breakfast is my favorite meal, and making me choose one breakfast is like making me choose a favorite book. I can’t bear to choose from the many I love, but if I had to, if you forced me, if I was shipwrecked on a desert island with a four-star chef and limited ingredients, and there was no cold pizza around (because that makes an awesome breakfast) I would have to say fried eggs, grits, thick-cut bacon and a giant, fresh buttermilk biscuit. I also like chocolate chip cookies for breakfast, but that goes without saying. They are a part of any well-balanced meal.
MGM: My kids now think you're the coolest person ever. (I allow them pizza for breakfast, but not the cookies.) Grazie so much for giving us your time on Middle Grade Mafioso today, Mr. London. It's been great.

Now, if that wasn't exciting enough.... There IS a Giveaway: Mr. London has offered a signed copy of We Are Not Eaten by Yaks to one lucky commenter. Usual Mafioso rules apply: Contest kicks into gear after 13 comments are left (the Don's lucky number is 13.) So get commenting. Multiple comments are welcome; just don't froth at the mouth. Contest will close on Sunday September 25 at midnight, PST. Ciao!!
Posted by Michael G-G at 3:00 AM