Yay! It's finally here! The Minion Blog Tour is making its stop in Mafiosoville. The Don has declared it a holiday, so we can all shout "hurrah!" while enjoying leftover pizza and one banana, sliced into twelfths. (Thanks bunches, John David Anderson--see the interview below.) The Don also thoroughly enjoyed the novel, especially the title which he has declared will be my official nomenclature from now on. So, please refer to me in all further correspondence as "Minion Michael."

Without further ado, let's put up the bunting for this very funny novel from John David Anderson--a companion to last year's Sidekicked.

What It's About: Michael Morn might be a villain, but he's really not a bad guy. When you live in New Liberty, known across the country as the City without a Super, there are only two kinds of people, after all: those who turn to crime and those who suffer. Michael and his adoptive father spend their days building boxes—special devices with mysterious abilities—which they sell to the mob at a price. They provide for each other, they look out for each other, and they'd never betray each other.

But then a Super comes to town, and Michael's world is thrown into disarray. The Comet could destroy everything Michael and his dad have built, the safe and secure life they've made for themselves. And now Michael and his father face a choice: to hold tight to their life or to let it unravel.

Opening Lines: "When I was twelve years old, give or take, my father strapped a bomb to my chest and drove me to the First National Bank and Trust so we could steal $27,500"

(Was his father the Don?! Sounds a wee bit similar, if you ask me.)

Why I Liked It: I'll say it again, as I say it for all successful middle grade novels. VOICE. All of Michael's preoccupations are those of a middle schooler, and they are delivered humorously with that certain sardonic quality most middle schoolers have. I also really liked the "mad scientist" Dad, and the mystery that unfolded: is there something more to Viola than first meets the eye? Who is behind all the new mayhem in New Liberty? And who is the Comet, the Superhero who has apparently arrived out of nowhere to save the town? I can see middle graders of all stripes lapping this one up!

Of course, I couldn't let this great day pass without collaring the author and shooting off my Mafioso questions to him. As you can tell, this guy John David Anderson is seriously funny. Here we go (my interpolations in italics):

1) Who are your favorite (middle grade) writers?
I try not to pick favorites. Mostly because of the whole dodgeball/team captain/don't-pick-Anderson-because-he's-too-short post traumatic stress of my childhood, and there are so many talented people penning middle grade fiction that my pantheon is ever expanding. Recently I have had the pleasure of reading the latest from Kate DiCamillo, Thanhha Lai, and Christopher Healy, and I'm looking forward to rereading M.T. Anderson and Douglas Adams again this summer. Those guys crack me up.

(This guy's got good taste. I'll pick him for the team!)

2) What's on your nightstand now?
A half empty Diet Coke can. The cat's hairball medicine (salmon flavored). A dozen Pokemon cards. One sock. And Kenneth Oppel's The Boundless.

(Man, this could totally describe my room in the Mafioso dormitory...)

3) Pick a favorite scene from your novel, and say why you like it
One of my favorites is when Michael's father first lets him down into the basement, but not before describing the lineage of box makers that he comes from. The book is full of boxes, both real and metaphorical, and I love that moment of hope and possibility before you open a box (or press the button, or unlock the door) and reveal the true nature of what lies inside. When Michael goes downstairs he's probably making the biggest decision of his life, and as Yoda tells us, Once you start down the dark path, and so on and so forth.

(I was a total sucker for the opening scene in the bank, too.)

4) Fill in the blank: I'm really awesome at....
Wasting time. Burning dinner. Forgetting the laundry in the washing machine. Playing the same three chords over and over on the ukulele. Eating chocolate. Clipping my nails. Petting the cat. Playing with my kids. Being sarcastic.

(I am awesome at number 3 too. Speaking of which... [sound of washing machine door opening. That lovely dank smell of forgotten laundry...]

5) My favorite breakfast is...
Leftover pizza. And a banana.

(Yeah, um, thanks. The Don took that one to heart.)

6) If you could visit any place, where would it be?
Narnia. Or Dubuque. No. Definitely Narnia.

Didn't I tell you he was freakin' hilarious? And welcome to all our new fans in Dubuque!

About the Author, in his own words:
John David Anderson writes novels for young people and then, occasionally, gets them published. Besides Minion, he is the author of Sidekicked, and Standard Hero Behavior. He lives with his patient wife and brilliant twins in Indianapolis, Indiana, right next to a State park and a Walmart. He enjoys hiking, reading, chocolate, spending time with his family, playing the piano, chocolate, making board games, chocolate, not putting away his laundry, watching movies, and chocolate. Those aren't his real teeth.

Link to Book Trailer on Facebook
To find out more about the author: www.johndavidanderson.org 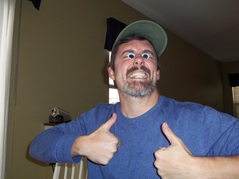 That's it, folks. If you would be so kind as to leave a comment, I will pick a pal to receive my ARCs of both Sidekicked and Minion. In the Don's words, "we need to spread the love about dese books, Minion. Get to it, presto!"