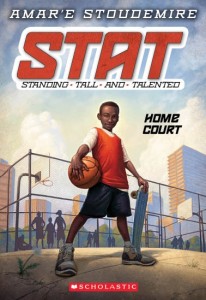 My youngest son is a basketball fiend, and last year (when he was in 3rd grade) he found this series in his school library. We've spent many an evening reading through the series. If you have a sports-loving kid, be sure to check these out!

What They're About
Based on NBA-star Amar'e Stoudamire's life, these books trace the success of young Amar'e (a.k.a STAT, the name given him by his father, and which is an abbreviation of "Standing Tall and Talented") on his middle school basketball team. STAT has two close friends, Deuce and Mike, who also love to play basketball--but Amar'e's talent takes him to another level, causing a rift. However, by the third book, the friends realize Amar'e's talent really is something else, and become his biggest supporters as he joins the school team and has to deal with some hostile 8th-graders.

There are five books in the series now. The first on e was published by Scholastic in 2012. Amar'e Stoudamire actually writes very well, and the books are well-structured and enjoyable. Other subjects dealt with include divorce (Amar'e's parents live in separate states,) and balancing school work with sport.

About the Author:
Born and raised in Lake Wales, Florida, Amar'e Stoudamire was a stand-out high school player, who went straight from high school to the NBA when he was drafted by the Phoenix Suns in 2002. During his career, he played for the New York Knicks, the Dallas Mavericks, and the Miami Heat. He currently plays for Hapoel Jerusalem. 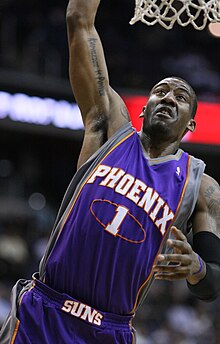