YA for a Day: EVIL LIBRARIAN by Michelle Knudsen 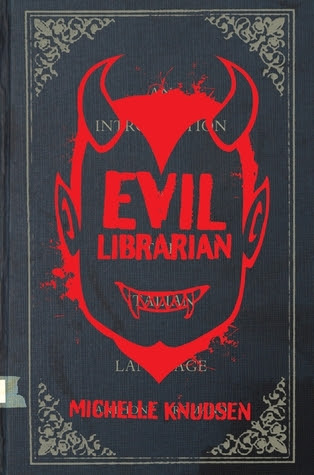 (Occasionally, Middle Grade Mafioso goes YA for a day. This is one of those days.)

What It's About (from Goodreads blurb): #EvilLibrarian He’s young. He’s hot. He’s also evil. He’s . . . the librarian.When Cynthia Rothschild’s best friend, Annie, falls head over heels for the new high-school librarian, Cyn can totally see why. He’s really young and super cute and thinks Annie would make an excellent library monitor. But after meeting Mr. Gabriel, Cyn realizes something isn’t quite right. Maybe it’s the creepy look in the librarian’s eyes, or the weird feeling Cyn gets whenever she’s around him. Before long Cyn realizes that Mr. Gabriel is, in fact . . . a demon. Now, in addition to saving the school musical from technical disaster and trying not to make a fool of herself with her own hopeless crush, Cyn has to save her best friend from the clutches of the evil librarian, who also seems to be slowly sucking the life force out of the entire student body! From best-selling author Michelle Knudsen, here is the perfect novel for teens who like their horror served up with a bit of romance, plenty of humor, and some pretty hot guys (of both the good and evil variety).

Opening Paragraph: "Italian class. The shining highlight of my Tuesdays, Wednesdays , and Fridays. Not because I'm any good at Italian (I'm not), or because I like the teacher (I don't). It's because Ryan Halsey sits one row over and two rows up from where I sit, which is absolutely perfect for forty-five minutes of semi-shameless staring."

Why I Liked It: The cover is great! Cyn's voice is pitch perfect, and there is a lot of inner lusting going on (hence the YA rating.) As the father of thespians, I also liked the fact that both Cyn and Ryan are heavily involved in the school musical, Sweeney Todd which, wouldn't you know, is also a demon favorite. And these demons aren't pussy-footing around either, folks. There are several adult deaths during the course of the novel, and a sort of demon gunfight at the OK corral which was pretty exciting action stuff. I wasn't surprised to hear that Evil Librarian won the 2015 Sid Fleischman Award for Humor from the SCBWI. In summary: it's a funny, fast-paced frolic, complete with sharp-looking teeth and hooked talons.

About the Author (from her website bio): Michelle Knudsen is a New York Times best-selling author of more than 40 books for young readers, including the picture book Library Lion (illustrated by Kevin Hawkes), the middle-grade fantasy novels The Dragon of Trelian and The Princess of Trelian, and the young adult novel Evil Librarian, which was awarded the 2015 Sid Fleischman Award for Humor. Her most recent book is the picture book Marilyn's Monster (Candlewick, March 2015), illustrated by the wonderful Matt Phelan. Michelle also works as a freelance editor and writing teacher, and is a member of the Writing for Young People MFA faculty at Lesley University. She lives in Brooklyn, NY.

Email ThisBlogThis!Share to TwitterShare to FacebookShare to Pinterest
Labels: Evil Librarian, Michelle Knudsen, YA for a Day 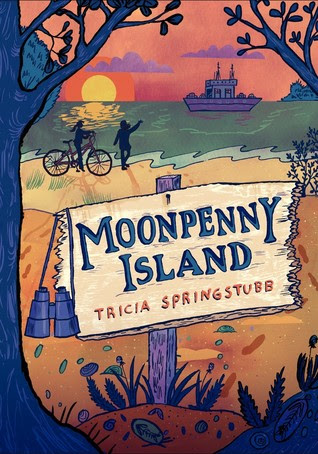 What It's About (from Goodreads blurb):
Moonpenny is a tiny island in a great lake. When the summer people leave and the ferries stop running, just the tried-and-true islanders are left behind. Flor and her best, her perfect friend, Sylvie, are the only eleven-year-olds for miles and miles—and Flor couldn’t be happier.

But come the end of summer, unthinkable things begin to happen. Sylvie is suddenly, mysteriously whisked away to school on the mainland. Flor’s mother leaves to take care of Flor’s sick grandmother and doesn’t come back. Her big sister has a secret, and Flor fears it’s a dangerous one.

Meanwhile, a geologist and his peculiar daughter arrive to excavate prehistoric trilobites, one of the first creatures to develop sight. Soon Flor is helping them. As her own ability to see her life on this little lump of limestone evolves, she faces truths about those she loves—and about herself—she never imagined.


Tricia Springstubb tells a warm and deeply affecting story about what it means to see, and why the biggest feat of all may be seeing through someone else’s eyes.

Opening lines: “Transparent. That’s how Flor and Sylvie are to each other. See-through. Flor knows everything about Sylvie, and Sylvie? She knows things about Flor before Flor knows them herself.”

Why I Loved It:
Moonpenny Island  is a lovely, elegiac novel about friendship, and siblings, and the power of community. From the first lines, I was swept into Flor's story. Flor is a young girl who lives life with passionate energy, a girl who feels things deeply. As the author says, with a nice touch of humor, “When she was little, Flor was famous for her bad temper… But now she knows how to handle her anger. Mostly.”

There is a lot of pain beneath the surface of island life. Flor's parents argue; Sylvie's family is dealing with alcoholism, as is the family of "bad boy" Joe Hawkins. But fortunately, Dr. Fife and his daughter, Jasper, come into Flor's life, and temper Flor's loneliness. The end of the novel moves toward hope and reconnection, and I found myself thinking about how the characters' lives would go on beyond the pages. Captivating stuff!

I'll let Dr. Fife have the last word: “Moonpenny Island! A microcosm of Earth’s complex and infinite variety! An old scientist could spend his life studying this place and only scratch the surface.”

I was lucky to have Tricia Springstubb agree to answer my Mafioso questions. Notice how she points out my bent towards "favoritism." the Don would approve!

Who are your favorite (middle grade) writers? I'm terrible at picking favorites (bites thumb, hunches shoulders) but here are a few MG writers I especially love: Linda Urban and Kevin Henkes, who both beautifully limn the quieter corners of childhood; Anne Ursu, who fearlessly faces loss and loneliness; Rebecca Stead, a master of deft economy; Kate DiCamillo, for the wordplay and wit of her most recent books.

What's on your nightstand now? My nightstand--I know it's under there someplace. On top are half a dozen New Yorker magazines, Marilynne Robinson's "Lila", "World War I for Dummies" (research for my next book), Judy Blume's "In the Unlikely Event", and "Binny in Secret" by Hilary McKay (who should have gotten mentioned in Question 1)

Pick a favorite scene from your novel and say why you love it: Favorite again? Uh oh. Okay. I'll pick the scene near the end of "Moonpenny" when Flor, Cele and Thomas play their old game Town. It's a make-believe game they invented long ago and have never shared with anyone else. Flor and her big sister are too old for it now, and they play it in a wistful, bittersweet, nostalgic way that chokes me up. During that scene, Flor realizes that her own heart has become a mystery to her, and may lead her places she never expected. The past, present and the future layer on top one another, and it's a moment I think all middle graders will recognize.

Fill in  the blank: I'm really awesome at... petting cats.

My favorite breakfast is... What's with this favorite business? Forced to choose, I'll go with homemade bread slathered with marmalade and lots of good coffee.

If you could visit any place, where would it be? Narnia. 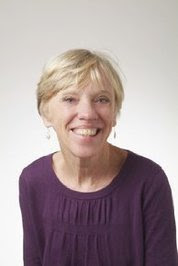 About the Author:
Tricia Springstubb was born in New York City, and lives in Cleveland Ohio. She's written a number of great books, including WHAT HAPPENED ON FOX STREET; MO WREN, LOST AND FOUND; and CODY AND THE FOUNTAIN OF HAPPINESS. If you want to learn more about her, you can visit her blog's page Frequently Asked Questions

Next year she has two new books out. One is the second book in her Cody series, CODY AND THE MYSTERIES OF THE UNIVERSE, and the other is a middle grade novel EVERY SINGLE SECOND.
Here's the flap copy for EVERY SINGLE SECOND, which publishes in June 2016. (Tricia says it's a shade darker than her usual novels.):

Twelve-year-old Nella Sabatini’s life is changing too soon, too fast. Her best friend Clem doesn’t seem concerned; she’s busy figuring out the best way to spend the “leap second”—an extra second soon to be added to the world’s official clock. The only person who might understand how Nella feels is Angela, but the two of them have gone from being “secret sisters” to not talking at all.

Then Angela’s idolized big brother makes a terrible, fatal mistake, one that tears apart their tight-knit community and plunges his family into a whirlwind of harsh publicity and judgment. In the midst of this controversy, Nella is faced with a series of startling revelations about her parents, friends, and neighborhood. As Angela’s situation becomes dangerous, Nella must choose whether to stand by or stand up. Her heart tries to tell her what to do, but can you always trust your heart? The clock ticks down, and in that extra second, past and present merge -- the future will be up to her.

Tricia Springstubb’s extraordinary novel is about the shifting bonds of friendship and the unconditional love of family; the impact of class and racial divides on a neighborhood and a city; and about a girl awakening to awareness of a world bigger and more complex than she’d ever imagined.

You bet I'll be reading this one! Thanks for stopping by, everyone--and have a great week.