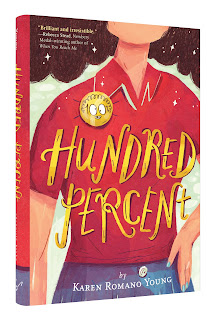 I am thrilled to be part of this blog tour for HUNDRED PERCENT, the latest by Karen Romano Young!

The last year of elementary school is big for every kid. Christine Gouda faces change at every turn, starting with her own nickname—Tink—which just doesn’t fit anymore. Readers will relate to this strong female protagonist whose voice rings with profound authenticity and absolute novelty, and her year’s cringingly painful trials in normalcy: uncomfortable Halloween costumes, premature sleepover parties, crushed crushes, and changing friendships. Throughout all this, Tink learns that what you call yourself, and how you do it, has a lot to do with who you are.

First Lines:
In late August, Tink got a new name. Her best friend, Jackie, renamed her. This was after Tink realized that none of her school clothes ﬁt and her mother took her on a hellish shopping trip involving two sizes up, three bras-for-the-very-ﬁrst-time, and four arguments about style that had both Mom and Tink in tears. On the way home, Tink convinced her mother to drop her at Jackie’s with all six shopping bags, so they could have a fashion show.

My Thoughts:
HUNDRED PERCENT is a tremendous portrayal of shifting friendships, and really captures all the confusion of 6th grade. I loved the characters' voices--and I think this is one of the truest renditions of the changing relationship between boys and girls at this age that I've read. I loved it!

Who are your favorite (middle grade) writers?
• Christopher Paul Curtis (Bud, Not Buddy)  This book is in my dreams and notes or allusions to it pop up in my own writing often.
* Jean Craighead George (fiction and nonfiction) This woman followed her own star to the north, and nerded out exactly as much as she wanted to.
• Louise Fitzhugh (Harriet the Spy) Because Harriet, unapologetically curious and observant and obsessed by writing. That Fitzhugh, what an enabler!
• Eleanor Estes (The Witch Family, Pinky Pye, The Moffats, Rufus M.)   Her writing is so natural, enchanting, it feels like home.
• Nora Raleigh Baskin (Nine, Ten)  Always taking chances and doing amazing things with not very many words.
• Hilary McKay (Saffy’s Angel, Forever Rose) The Casson Family series are my go-to’s when I’m sad, or lonely, or want to do art or write or just about anything. I love these books so much, and when I learned my editor, Chronicle’s Taylor Norman, loved them too, I knew I was in the right place.
• David Macaulay (The Way Things Work) Macaulay is proof to me that you can be yourself and do it well and come up with great books that change people’s lives.
• Brian Selznick (Hugo Cabret, Wonderstruck) I just can’t even talk to Brian Selznick, I am so in awe of him.  I see him at conferences and circle him but never approach.
• Grace Lin (Where the Mountain Meets the Moon) Here is someone whose work started out great and just gets better and better. Lin is so talented!

2) What's on your nightstand now?
• Arthur Ransome’s Swallows and Amazons books — They are a little dated in some ways but really are incredibly respectful toward children. These books emphasize something I can’t get enough of these days: the idea that kids are able, responsible, and capable of independence.
• The Girl Who Played with Fire — It’s not often I get drawn in by a thriller, but this series seems to break so many molds that I’m fascinated, waiting to see what will happen next.
• Julia Cameron’s The Artist’s Way. I started working through this amazing book/program in September 2015 and have found it to be transformative.  It’s not easy being a writer sometimes — and this book helps.
• Eleanor Estes’s Pinky Pye.  Because it’s summer and the family’s at Fire Island and Uncle Bennie (age 4) is catching crickets every day and wondering why they are missing every morning. What’s getting them?  Don’t you want to know? Pinky the kitten is on the case…  Also, I find Edward Ardizzone’s illustrations to be sublime (he illustrated The Witch Family, too).

3) Pick a favorite scene from your novel, and say why you like it.
Oh wow!  What a question!  Is it the scene I like the most or the one in which I’m most pleased with my writing? I think it has to be one of the parts where people are playing with words. Jackie and Tink do it just as much as Bushwhack.  I do love the part where Bushwhack is in the bowling alley and Jackie is trying to teach Stanley to bowl, and Tink calls Keith “lava boy” and then realizes it sounds like “lover boy” and instead of being mortified, the two of them just burst out laughing.  But I also love the phone conversation where they are talking about Romeo and Juliet and lobsters at the same time, and one of them says, “O that I were a claw upon that lobster” instead of “O that I were a glove upon her hand.” 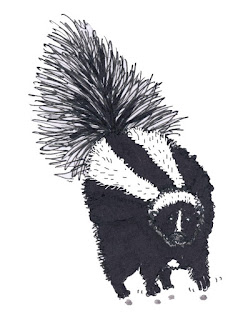 5) My breakfast of champions is…
This is funny because just last week I described my lunch of champions as peanut M & Ms and iced coffee. 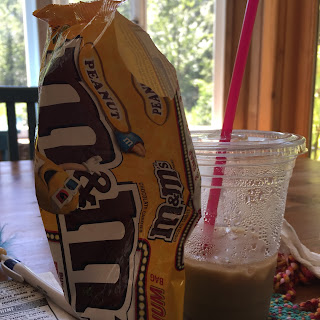 6) If you could visit any place, where would it be?
Antarctica.

I have a copy of this marvelous book I would like to send to one lucky commenter. Leave a comment, with your email address within, for a chance to win. (US and Canada only, please.) Ciao! UPDATE on 9/18: The winner, chosen by Random.org, is Andrea Mack. Andrea, I'll be getting in touch with you soon!
Posted by Michael G-G at 2:30 AM