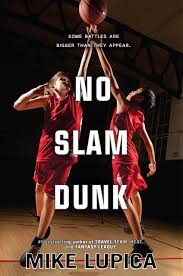 NO SLAM DUNK by Mike Lupica

What It's About (from Goodreads):
Wes' father always told him that there was only one ball in basketball. That you had to know when to take it yourself and when to give it up, that finding the right balance was key. So at every practice and game, Wes tries his best to be a good basketball player and, above all, a good teammate.


As the season kicks off, Wes finds that not everyone on his team has the same idea. All-star player and the Hawks' point guard, Danilo "Dinero" Rey seems determined to hold the spotlight and the ball, even if it means costing his team the game. If Wes is to lead the Hawks to the playoffs, he'll need to find new ways to dish out an assist--even if it means his most important one comes off the court.

Everybody always says there's only one ball in basketball.
Now one had just hit Wes in the side of the face, making him feel like somebody had slapped him.
Hard.


What I Liked About It:
I like novels about sports, even those I never had a clue about when I was a schoolboy in England many moons ago. (Basketball has since become a world-wide sport, so I would have no excuse nowadays.)

There's no doubting that Mike Lupica knows what he's doing when it comes to sports. The guy was a celebrated broadcaster for many years, and his descriptions of the game are spot on. But what makes a sports book top-notch is when the plot goes beyond the sport itself. In this novel, Wes is dealing with a father with whom he was once close, a father who was a basketball mentor for him. But his father has seen horrors in war, and has come back from active duty battling demons (including alcohol.)

This is deftly handled, and one feels for Wes as he tries to succeed both on the basketball court, as well as dealing with the way his family has been fractured. Lupica's secondary characters are well-rounded (Wes' best friend, Emmanuel, and his mentor, Mr. Correa.) There is also a great rivalry going on with Dinero Rey. Dinero is a bit of a show boat, and has his own issues. Can he be part of a team, with a player like Wes, who is equally as good, or will Dinero give in to ball-hoggery and bring the team down?

My 12-year-old is an extraordinary basketball player, and we read this novel aloud together, Here's what he thought: No Slam Dunk doesn't just tell you about what's on the court, it also tells you about what's happening off it. It really makes you see these characters in another way. I like the story and the conflicts and the way they solve it. I would give No Slam Dunk a 9 out of 10.
(Editor's note: The 12-year-old wrote the above paragraph himself, and changed his bio from 'great' to 'extraordinary.' He's as humble as his old man!)

About the Author (from Amazon):
Mike Lupica began his newspaper career covering the New York Knicks for the New York Post at age 23. He became the youngest columnist ever at a New York paper with the New York Daily News, which he joined in 1977. For more than 30 years, Lupica has added magazines, novels, sports biographies, other non-fiction books on sports, as well as television to his professional resume. For the past fifteen years, he has been a TV anchor for ESPN's The Sports Reporters. His previous young adult novels, Travel Team, Heat, Miracle on 49th Street, and Summer Ball, have been New York Times bestsellers. Lupica is also what he describes as a "serial Little League coach," a youth basketball coach, and a soccer coach for his four children, three sons and a daughter. He and his family live in Connecticut. 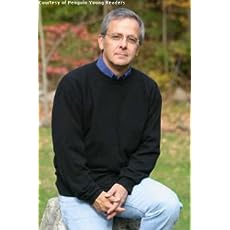