Tom Gates: Excellent Excuses (and Other Good Stuff) is the second installment in Liz Pichon’s series for middle-grade readers. Tom Gates is a best-selling phenomenon in the UK and kids on this side of the pond will love him too.

What It's About: No school for two whole weeks! Now Tom has plenty of time for the good stuff, like finding new ways (so many!) to annoy his big sister, Delia. Or watching TV and eating caramel candy. Or most important, band practice for DOGZOMBIES in his best friend Derek’s garage (while not encouraging Derek’s ’60s-music-crazed dad). All that stands between this band and rock greatness is, well, a song (besides “Delia’s a Weirdo”). And finding a drummer. And landing a gig. Will Tom let a killer toothache and pesky overdue homework get in his way?

Leave a comment and you'll be entered in the prize pack giveaway. (US/Canada readers only, please.)
Posted by Michael G-G at 2:30 AM 2 comments: 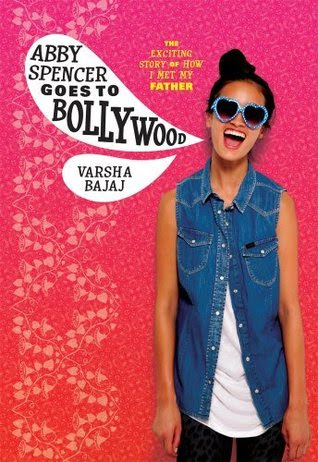 What It's About (from Goodreads): What thirteen-year-old Abby wants most is to meet her father. She just never imagined he would be a huge film star--in Bollywood! Now she's traveling to Mumbai to get to know her famous father. Abby is overwhelmed by the culture clash, the pressures of being the daughter of India's most famous celebrity, and the burden of keeping her identity a secret. But as she learns to navigate her new surroundings, she just might discover where she really belongs.

Opening Lines: "The one thing I want in my life...? Hmm.
Miss Cooper needs to know that? Really?
My eyes dart from Zoey on my right to Priya diagonally across from me to the clock directly above Miss Cooper's head. Three minutes to the bell. Unlike me, my friends are scribbling furiously."

What I Loved About It:

Varsha Bajaj got the MG voice just right. Abby is a likable character, with friends. The novel moves swiftly (Abby has an allergic reaction in the first chapter, which rapidly raises questions about whether her father--whom she's never met--might also have a similar allergy) and soon Abby is on her way to India, where her father is a huge Bollywood star. There, culture shock awaits as she experiences Mumbai as "both a city of dreams and of extreme poverty."

Quite unusually for middle grade, there really aren't any antagonistic adults either. Abby is greeted and welcomed in India by her grandmother, her father, and the servants of the house. Her father's girlfriend, a famous actress, is also kind to her. Essentially, Abby's only enemy is herself, as she goes through very relatable emotions about her relationship with her dad and whether he wants to accept her publicly or not.

There is also a very sweet (and completely MG!) romance between Abby and Shaan--an Indian-American boy who is also visiting family in India.

I also think the cover is delightful!

N.B. ABBY SPENCER GOES TO BOLLYWOOD was a middle grade finalist for the 2014 Cybils award.

I contacted Varsha Bajaj, and am thrilled that she graciously agreed to answer the Mafioso questions. Here goes:

1) Who are your favorite (middle grade) authors): Kate D’Camillo, Gary Schmidt, and Lynda Mullaly Hunt are some of my favorites.

2) What's on your nightstand now?
Goldfinch by Donna Tartt, The Signature of All Things by Elizabeth Gilbert, Stitching Snow by RC Lewis, The Truth about Twinkie Pie by Kat Yeh, and All Four Stars by Tara Daiman.

3) Pick a favorite scene from your novel, and say why you like it.
I loved writing the scene where Abby and Shaan go for a ride in the rickshaw. I love rickshaw rides myself. They are bumpy and I love the way rickshaws are decorated. Each one has an over the top unique style. Rickshaws have a roof but no doors and that to me is a bit crazy.

4) Fill in the blank: I'm really awesome at....
Putting my feet up and reading a book all afternoon. I have a hot cup of chai and possibly chips to munch on while I read. (MGM: I agree--that sounds delightful!)

5) My favorite breakfast is...
Toasted bagel with butter, or scrambled eggs on an English muffin and if I am splurging and it is available a dosa.

6) If you could visit any place, where would it be?
I have to choose one? I want to see the world but I would especially love to visit Italy. (MGM: The Don gives you his seal of approval, Varsha!)

About the Author:
Originally from Mumbai, India, Varsha Bajaj came to the United States in 1986 as a graduate student. As she says in her website bio: "After a dozen intermediate years in which I got a Masters degree, worked as a Counselor, got married, had two children and became a citizen, I started writing. It was 1999, two years after my daughter was born; my son was five and I had fallen in love with the picture book." Prior to Abby Spencer Goes to Bollywood, Varsha published two picture books: How Many Kisses Do You Want Tonight? (2004) and T is For Taj Mahal: An India Alphabet (2011). She is represented by Jill Corcoran at the Jill Corcoran Literary Agency.

Thanks for stopping by today! Ciao!
Posted by Michael G-G at 2:30 AM 6 comments: Paul Greci is one of my Project Mayhem colleagues, and this is his debut. And a very fine debut it is too!

What It's About: (From the Move Books website)
Tom is kayaking with his father in Prince William Sound near Bear Island. When the waters turn rough and the boat overturns, Tom is stranded and alone with a pocket survival pack his father insisted he carry. But is it enough? Will he survive on the desolate island where his only company are bears, other wild animals and the harsh terrain? His dad would know what to do, but is Tom savvy enough to survive?

Opening Lines:
A wall of dog-like heads was closing in on us. Sea lions, six or eight of them, swam side by side. They raced toward us like they were gonna swim right through us, stretching their necks and plowing through the water like they had motors attached to their backs. I gripped my paddle tighter and held it just above the water, waiting, watching, just like Dad. then, at the last second they dove."

Why I Loved It:
I must confess I'm not much of an outdoorsman, and the reality is that I wouldn't last more than a day stranded on an island inhabited mostly by bears. But Paul Greci's novel was so engrossing and so lifelike that I really began to feel like I was in Tom Parker's head during this ordeal.

Tom survives for more than sixty days, using his ingenuity and paying heed to the teachings of his father, who appears to have been lost at sea. In fact, Tom believes he actually hears his fathers voice--and this adds to the book's innate tension: will he find (or be found by) his father? Or is he really alone, and will he be able to hunt and gather enough food to survive? There are incidents with bears, porcupines, salmon, and a baby sea otter--as well as a heart-pounding bear chase.

The novel is made even richer by the zigzags in the narrative as it moves in time between Tom's present, and the past events which led to the accident--as well as the knowledge that Tom's mother also died in an accident, and the guilt that Tom carries because of that.

Finally, the book also brings Alaska to life. Paul Greci knows the land about which he writes, and the setting is as much a character as any of the humans depicted within.

I treated Paul to the traditional mafioso interview--as well as some special extra questions about Alaska. Enjoy!

1) Who are your favorite (middle grade) writers?
I have many favorites, but here are three: Will Hobbs, Jill Patton Walsh, Natalie Babbitt.

2) What's on your nightstand now?
All the Light We Cannot See by Anthony Doerr

3) Pick a favorite scene from your novel, and say why you like it:
Let’s see. The scene where Tom encounters a sea otter pup. I like this scene because it illustrates the complexities involved in making external survival decisions coupled with internal conflict. And, the scene turned one of my readers into a vegetarian.

4) Fill in the blank: I am really awesome at... getting up early in the morning and squeezing in some writing time before heading to work.

5) My favorite breakfast is... oatmeal. I eat it five days a week. Pretty boring, I know. But it is grounding, too.

6) If you could visit any place, where would it be?
Wow! There are so many places I’d love to go but I’ll just choose one. I’ve always been fascinated by Easter Island and those big stone statues.

Did you have real-life experience of catching and eating porcupine (as well as salmon and deer)--or did you come by your information another way?
I have fished for salmon many times and have cooked them the way Tom does. On a solo kayak trip I came up with the cooking method that Tom uses. I have never eaten a porcupine!

About the Author: Paul Greci is a teacher and writer who lives in Fairbanks, Alaska. If you want to see photos of his many adventures, you can find them on his Bio page on his website, Northwriter.