Full disclosure: the illustrator, Roy DeLeon, is a former colleague of my wife's. He's a delightful man, and a fantastic artist. It was a delight to see his illustrations in this marvelous book.

What It's About (from Amazon):
This is the story of a stray born on the Via della Conciliazione in Rome, how she’s adopted by the Pope, and then “rules” the Vatican from museum to floorboard! First in a new series.

No one has a closer view of what’s happening in the world’s tiniest nation, Vatican City, than Margaret, the Pope’s new cat. But she wasn’t always Margaret, and she wasn’t always the Pope’s cat. She started out as a stray on the streets of Rome, and there are those in the Vatican who wish she’d never been allowed inside.


This fun, adorable new character will appeal to all kids!  Here is a cat who does what she likes regardless of what others, even someone like the Pope, expects of her—even when the Queen of England comes on a state visit!


"People walk by Maria's Roma Gelato stand every day without noticing the cat sitting on the cobblestones. Actually, she isn't so much sitting as she is lounging in the shade provided by Maria's trash cans. But the people are too busy."


My Thoughts:
This is more chapter book than middle grade, weighing in at 62 pages. It's a very sweet story about an animal-loving Pope (the front matter claims that 'no historical Pope or Holy Father, past or present, is intended'--but it's difficult not to think of the current Pope as the model.) The plot is simple: during his early morning walk, when the Pope has the Vatican to himself, he comes across a stray cat. He scoops her up, smuggles her into his apartment in the Vatican, and names her Margaret.

Mischievous Margaret sneaks out of the apartment and heads straight for the state dinner with the Queen of England!

The promotional material focuses on a Catholic audience, but I think this story could be savored by those of all faiths as well as none. As a teaching tool, it could lead to discussion of the nature of the papacy, of Rome, and of life in the Vatican, introducing such fixtures as the Swiss Guards. But it is also a simple tale of a man's loves for animals, and for taking in the strays of the world--who are labeled by no less than the mayor of Rome as a "menace to good society," and are targeted and rounded up. Knowing how the real Pope Francis feels about the plight of the world's refugees, it was impossible not to make this larger connection.

The illustrator, Roy DeLeon, is a family friend--and it was delightful to hear of his work on this book, and to have a finished copy in our hands! There will be a second book in the series, coming in October, 2018.

About the Author (adapted from Amazon bio):

Jon M. Sweeney is an independent scholar and author of popular history, spirituality, poetry/mysticism, memoir, and young reader fiction. He is the author of 30 books including many about Francis of Assisi such as When Saint Francis Saved the Church, The Complete Francis of Assisi, and The Enthusiast. HBO optioned the film rights to Sweeney's history about the medieval Celestine V, The Pope Who Quit. Sweeney, a father of four, is married to a congregational rabbi and lives in Milwaukee, Wisconsin. 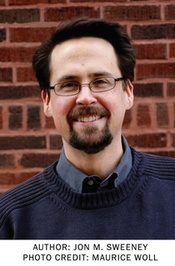 About the illustrator (from the book jacket)
Roy DeLeon is an Oblate of St. Benedict, spiritual director, yoga instructor, graphic designer, and professional visual artist. He is also the author of Praying with the Body. Roy lives in Bothell, Washington, with his wife, Annie.