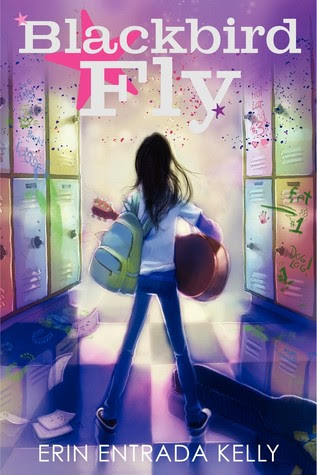 What It's About (from Goodreads blurb):
Apple has always felt a little different from her classmates. She and her mother moved to Louisiana from the Philippines when she was little, and her mother still cooks Filipino foods, makes mistakes with her English, and chastises Apple for becoming “too American.” It becomes unbearable in middle school, when the boys—the stupid, stupid boys—in Apple’s class put her name on the Dog Log, the list of the most unpopular girls in school. When Apple’s friends turn on her and everything about her life starts to seem weird and embarrassing, Apple turns to music. If she can just save enough to buy a guitar and learn to play, maybe she can change herself. It might be the music that saves her . . . or it might be her two new friends, who show how special she really is. Erin Entrada Kelly deftly brings Apple’s conflicted emotions to the page in her debut novel about family, friendship, popularity, and going your own way.

Opening Lines:
"On the day we moved to America, it snowed in Chapel Spring. Louisiana, for the first time in twenty years. My mother said it was a sign that the seasons of our lives were changing. Even though I was only four years old, I can still remember how she hugged me close and said we had something wonderful to look forward to: a life as real Americans.

What I Liked About It:

About the Author (from back jacket):
Erin Entrada Kelly grew up in south Louisiana and now lives in Philadelphia. Erin's mother was the first in her family to immigrate from the Philippines. Blackbird Fly is Erin Entrada Kelly's first book.

**BLACKBIRD FLY is a CYBILS finalist! Look for the winner to be announced on February the 14th.
Posted by Michael G-G at 2:30 AM 11 comments: