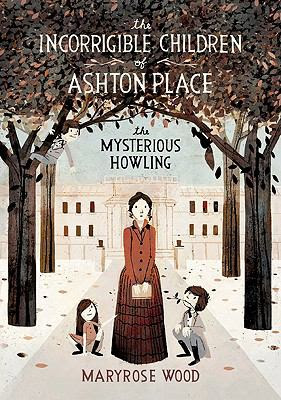 The Incorrigible Children of Ashton Place: The Mysterious Howling by Maryrose Wood.

I'm coming out and saying this upfront: I LOVE THIS NOVEL!

It's the voice, folks. A wry, omniscient narrator leads us through the story, which is set around the time of Dickens in Merrie Olde England. I was delighted by passages such as this:

In England (and in some other countries as well), the day after Christmas is called Boxing Day.

Nowadays Boxing Day is the day in which stores put all their merchandize on sale, thus giving exhausted and bankrupt shoppers the chance to stand in line for hours in hopes of saving ten percent on a new microwave oven, which, presumably, would come in a box. In Miss Penelope Lumley's day it was the occasion for small boxes of holiday presents to be distributed to the servants, and that is where the name "Boxing Day" originated.

(The bold bits are my pointing out how this kind of humor works--juxtaposing exhausted and bankrupt with the supposed excitement of standing around for a small savings on something mundane. It's in the details ("ten percent on a microwave oven").

The story is sort of Jane Eyreish. Young Penelope Lumley--she's fifteen--is plucked from "The Swanburne Academy for Poor Bright Females" to be the governess to a trio of "incorrigible" children who appear to have been raised by wolves and are now in the keep of Lord Fredrick Ashton, and his new bride Lady Constance.

Lord Fredrick's a bit of a dolt and keeps mainly to his club. Lady Constance is a prattler, and terrified of the children. Penelope, with the fortitude and good taste with which the Swanburne Academy has imbued her, starts to "civilize" the children (who have been given the names Alexander, Beowulf, and Cassiopeia Incorrigible by Lord Fredrick.) Lady Constance is hell-bent on giving a Christmas Party, and the children are going to be on display. Suffice it to say that mirth and squirrel-related mayhem ensue. And then we're left with the question of whether anyone's bricked up in the attic...

This is book 1 in a series. I immediately went out to get Book 2. It would be a great read-aloud (isn't anything in which one has to employ an English accent?) and would appeal to those readers who devoured Lemony Snicket and other such witty works.

To learn more about the author, Maryrose Wood, who also writes books for older teens, visit her website HERE

Here are some other MMGM bloggers with their reviews for this week. Check 'em out!

Barbara Watson continues her special MMGMM summer series by spotlighting THE MOSTLY TRUE STORY OF JACK. Click HERE to see what she thinks.

-Joanne Fritz is highlighting SECOND FIDDLE. Click HERE to read her thoughts.
-Shannon O'Donnell always has fabulous MG love going on at her blog on Mondays. Click HERE to see what she has going on today.
- Pam Torres makes her MMGM debut with a feature on PLAIN KATE. Click HERE to see what she thinks (and welcome her to the group!)
And then, there's always the Ringleader of MMGM, Shannon Messenger. She's reviewing book one of the Pendragon series on her blog today. Plus she has a GIVEAWAY HERE.
Posted by Michael G-G at 2:32 AM