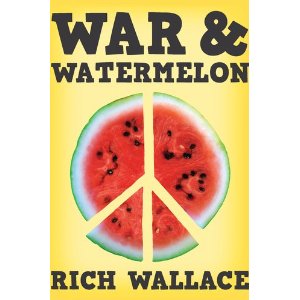 War and Watermelon by Rich Wallace (Viking, 2011) is another Cybils nominee that I found compelling -- despite having a lot of football stuff. (The mafioso didn't grow up playing football, and still finds it mystifying. His misspent youth was on the bocce court.) If a writer can make sports interesting--which Rich Wallace can--it speaks volumes for that writer's skill.
Opening Lines: I look across the pool and see Patty Moriarty and Janet DeMaria hanging out by the refreshment stand. They're in two piece bathing suits, but not bikinis. They're the type of girls that are over our heads. Not at the top of the list of coolest girls, but close to it. We're pretty much near the bottom of the guys; low-middle at best.
The story: (from Goodreads) It's the summer of 1969. We've just landed on the moon, the Vietnam War is heating up, the Mets are beginning their famous World Series run, and Woodstock is rocking upstate New York. Down in New Jersey, twelve-year-old Brody is mostly concerned with the top ten hits on the radio and how much playing time he'll get on the football team. But when he goes along for the ride to Woodstock with his older brother and sees the mass of humanity there, he starts to wake up to the world around him-a world that could take away the brother he loves.
Why I liked it: Wallace does a great job capturing the voice of twelve-year old Brodie, and gives him a believable inner life, with all the changes that are going on at that age. What looms over everything, however, is the Vietnam war, and the fact that Brodie's older brother, Ryan, will be eligible for the draft. Ryan and their father have supreme moments of tension, but there is redemption at the end. A satisfying story in every way.
About the Author: Rich Wallace is the author of novels such as Wrestling Starbridge and the Winning Season series. He lives in New Hampshire. You can learn more about him in this bio from his website.
Posted by Michael G-G at 2:05 AM