Hello, one and all. Today I'd like to welcome my good friend and fellow critique group member, Rosanne Parry. Rosanne is the author of Heart of a Shepherd and Second Fiddle--and Second Fiddle has just come out in paperback. And guess what? Rosanne has offered to give away not one, but TWO copies. So get commenting, and two of you could be lucky winners this week.

Here are the covers of Rosanne's novels: 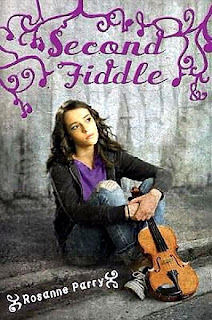 What Goodreads says about Second Fiddle:

The author of Heart of a Shepherd offers another sensitive portrayal of military families, this time stationed abroad, in the city of Berlin at that historic time just after the Wall came down.

When 13-year-old Jody and her friends save a badly beaten Russian soldier from drowning, they put into motion a chain of events that will take them from Berlin to Paris and straight into danger. Jody must quickly learn to trust herself, because in the time directly after the fall of the Berlin Wall, the border between friend and enemy is not as clear as it once was.

MGM: Second Fiddle has a very different setting than your debut, Heart of a Shepherd. Can you tell us how you came up with the story, and what excited you the most in telling it?


RP: My husband was stationed in Germany right after the fall of the Berlin Wall. It was a fascinating time to be living overseas. It meant lots of upheaval and lots of uncertainty, but also much hope for a more peaceful future without the specter of war between the US and the USSR.
It’s a good mirror for the upheaval all middle school students go through as they prepare to leave old friends and embark on the adventures of high school. So it was a great backdrop for Jody and her friends in Second Fiddle, who are not only leaving 8th grade, but also leaving their homes on a military base in Berlin and leaving each other and the joy of making music together as a string trio. I know how much I wanted to cling to my middle school friendships and how much I would risk for one more day with them when the school year or summer camp was coming to an end. It was just the story energy I needed to launch a girls’ road trip adventure.
MGM: You and your editor, Jim Thomas of Random House, discussed whether Second Fiddle should be MG or YA. Can you share some of that discussion with us—e.g. why that was even a choice in the first place—and the reason why you finally ended up writing a middle grade novel.
RP: Jody, Vivian and Giselle are at the end of their 8th grade year. So they are right on the edge of MG and YA. Jim and I talked about what it would mean for the story to take it one direction or the other. For example, the Soviet soldier the girls rescue at the beginning of the story is 26, too old for a romance but a good candidate for a crush, which would take the story in a YA direction. The girls end up on their own in with no money.  If they encountered pickpockets, drug dealers and similar dangers, the story would be YA, but if they found kindness in the strangers they met, the story would fall on the MG side.
My editor was very willing for me to take the story whichever direction felt right for the characters, so I thought long and hard about what Jody really wanted. At heart Jody is a musician. She’s not really interested in romance or rebellion. She just wants to make music with her friends, so I decided to stick with the MG audience. I made the Soviet soldier a fellow musician who has a little sister Jody’s age. That made the relationship fall more naturally into the mentor/big brother realm. The great thing about keeping it in MG was that instead of exploring the dark underbelly of urban Paris, I could have my girls meet people from a cross-section of French culture and use their music to make a connection with them.
Parisians have a bit of a reputation for pride, but on my visit there in 1991 with my husband and baby daughter, I found them charming and generous. Even 45 years after the Second World War, the French remembered what American soldiers did to liberate their country, and my soldier husband heard expressions of gratitude from several people we met who were old enough to remember. It was very touching.
MGM: The theme of music is so important in Second Fiddle. I know you are part of Stages on Pages, a group of young adult and middle reader authors who are crossing the country in support of the performing arts. How did that group form? What other novels about making art and music would you recommend?


RP: Stasia Ward Kehoe is the force of nature behind the Stages on Pages group. She put together a group of 12 authors with books about the performing arts. We’ve been to schools and bookstores in Oregon, Washington, California, New York, and New Hampshire. My favorite part of these events is meeting the kids who come and perform with us. We’ve had actors, singers, and even an all-boy string quartet! Our next Stages on Pages event is at the Cedar Hills Powells on Friday April 13th at 4:30. Our special guests will be the Portland Symphonic Girl Choir. Come and bring a friend! It’s sure to be inspiring.
And here’s the link to the Stages on Pages website http://www.stagesonpages.com/
The other MG book on the Stages on Pages tour is Vanished by Sheela Chari. It’s a mystery involving a string instrument from India, the veena. It was nominated for an Edgar award. Mozart Season is Virginia Euwer Wolff’s story about a girl preparing for a prestigious violin competition. For any one who’s serious about their music, it’s a great story. Virginia is herself an accomplished chamber player, so she writes this character with both warmth and authority.
MGM: Finally, a general question: What’s the best writing advice you’ve ever received?
The best teaching I ever got for my writing was from Mr. Chet Skibinski, my junior year English teacher at Sunset High School. He was the first teacher I ever had who gave my paper two grades, one for the content of my ideas and quality of my expression and a separate grade for spelling, punctuation and grammar. Up until that year, I’d assumed I was a terrible writer simply because I was a poor speller. Mr. Skibinski’s willingness to look at the mechanics of writing separately from the art of writing made a world of difference for me. I’m sure he’s long since retired, but I’ll always remember his kindness and encouragement.
MGM: Thank you, Rosanne! (I'm hoping Rosanne will have time to pop in sometime today, so if you have any questions for her, leave them in the comments. Also, I will announce the winner of the signed ARC of The One and Only Ivan tomorrow.)