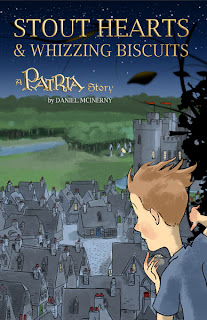 On my sister blog, The Year of Writing Dangerously, I wrote last week about the many recent successes that self-published authors have had with being snapped up by agents and then being republished by traditional publishing houses. It seems that an increasing number of writers are taking the self-publishing route and putting out good work which is finding a market.

Apropos to this, I recently read Stout Hearts and Whizzing Biscuits, the first volume of Daniel McInerny's Patria stories. Mr. McInerny hasn't been snapped up by a traditional press (and he may not want to be, for all I know), but he is certainly proving adept at writing both a good story and combining this with an entertaining and visually pleasing website. Folks, this sort of thing may be the shape of things to come.

The Story: The Stoop family has recently moved onto a piece of land in rural Indiana called the Cow Park. One day, while driving his father's Lawn Beast, eleven-year-old Oliver Stoop finds himself ambushed by a gang of kids, some dressed as native Americans, some as medieval knights, who claim to be Patrians, descendants of the ancient Trojans. The Cow Park is disputed territory. Initially, Oliver is pressed by his father into being a spy, but he soon comes to enjoy and appreciate the Patrian children, especially Prince Farnsworth and Princess Rose--she of the hard and whizzing biscuits. The children band together to solve one of Patria's most enduring mysteries: what happened to the treaty of alliance between the US and Patria? And can they find the missing treaty before war breaks out?

What I liked: Daniel McInerny has an appealing sense of humor and is not afraid to go full-bore at creating an eccentric cast of characters. The story zips merrily along, and young Oliver, with his bookwormy ways, is a likable MC. Also, there's quite the array of machinery--from the Lawn Beast to Farnsworth's old Studebaker--which middle graders will love. (Plus a helicopter and gunfire!) It's written in a rather formal style, reminiscent of the novel I'm currently reading with my 9-year-old: A Hero's Guide to Saving the Kingdom, which gels perfectly with the subject matter. Some of the jokes and wordplay might go over a 9-year-old's head, but I bet they'd like the energy behind it. (The young blogger at This Kid Reviews Books certainly found it so.)

More about Patria and Daniel McInerny: The Patria website is definitely worth a look. I also found an interesting interview with Daniel by Heather Kelly, at her blog Edited to Within an Inch of My Life. I must say that I find Daniel McInerny's drive and creativity inspiring!

The next volume in the Patria stories is Stoop of Mastodon Meadow. I'll be looking that one up too!

HAPPY MIDDLE GRADE MONDAY, EVERYONE!
Posted by Michael G-G at 2:30 AM