Marvelous Middle Grade Monday: THE WHOLE STORY OF HALF A GIRL by Veera Hiranandani 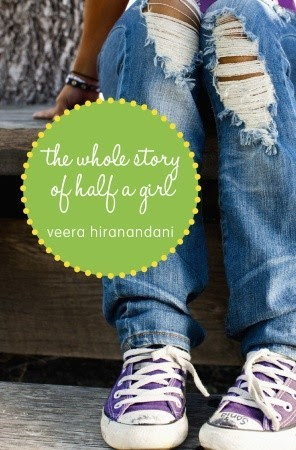 THE WHOLE STORY OF HALF A GIRL by Veera Hiranandani (Dealacorte, 2012)

I have to admit that I love middle grade novels that have diverse characters. In this one, the MC is half-Indian and half-Jewish--and she feels she fits into neither world!

What it's About (from the jacket copy): After her father loses his job, Sonia Nadhamuni, half Indian and half Jewish American, finds herself yanked out of private school and thrown into the unfamiliar world of public education. For the first time, Sonia's mixed heritage makes her classmates ask questions—questions Sonia doesn't always know how to answer—as she navigates between a group of popular girls who want her to try out for the cheerleading squad and other students who aren't part of the "in" crowd.
At the same time that Sonia is trying to make new friends, she's dealing with what it means to have an out-of-work parent—it's hard for her family to adjust to their changed circumstances. And then, one day, Sonia's father goes missing. Now Sonia wonders if she ever really knew him. As she begins to look for answers, she must decide what really matters and who her true friends are—and whether her two halves, no matter how different, can make her a whole.

Opening Lines: "I'm in school, sitting with my hair hanging long down the back of my chair, my arm around my best friend, Sam. We're planning our next sleepover. Sam's parents have the tent and sleeping bags; her mom even bought us cool spy pen-flashlights just for the occasion. To top it off, it's Friday and summer's only two weeks away."

What I Liked: As you can see from the opening lines above, Sonia starts the novel feeling happy. However, within the space of a page-and-a-half, Sonia goes from thinking "life's pretty good," to hearing the news that her dad's lost his job, and that her future is about to change. Next September, she is to leave her beloved school, called "Community." and enroll in a public school.

Veera Hiranandani does a great job making Sonia's emotions believable. She does an equally great job at mapping out changing friendships. Sonia and Sam are never going to be as close again; in fact, Sonia is thrust into a new set of friendships which are very confusing. I liked the fact that the cliquish girls were not too stereotypically unlikable. Kate, a cheerleading type, takes an interest in Sonia, and Sonia ends up becoming a cheerleader (much to her mom's amazement and chagrin.) Sonia's friendship with Kate is always tenuous--beset by highs as well as embarrassments.

There are also interesting explorations about subtle and not-so-subtle racism, about mental illness (Sonia's dad disappears because he is suffering from a major depression), and about what it means to be biracial and wondering where you really belong. The ending is nicely understated. Sonia's father is in treatment, and the family goes to visit him. There, Sonia and her father have a conversation.

"We all feel like that, for one reason or another. But I'll tell you one thing."

"There is only one Sonia. And the rarer the thing, the more special it is."

About the Author (from the jacket): Veera Hiranandani... received her MFA in fiction writing from Sarah Lawrence College and has written fiction for children and adults. Besides being a writer, she is also a Montessori teacher. Veera lives in New York with her husband, daughter, and son. This is her first novel for young readers. WEBSITE   TWITTER

Email ThisBlogThis!Share to TwitterShare to FacebookShare to Pinterest
Labels: Marvelous Middle Grade Monday, The Whole Story of Half a Girl, Veera Hiranandani