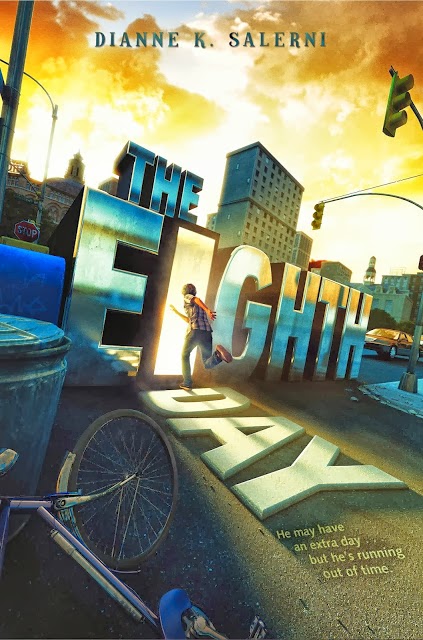 What It's About (from Goodreads): In this riveting fantasy adventure, thirteen-year-old Jax Aubrey discovers a secret eighth day with roots tracing back to Arthurian legend. Fans of Percy Jackson will devour this first book in a new series that combines exciting magic and pulse-pounding suspense.
When Jax wakes up to a world without any people in it, he assumes it's the zombie apocalypse. But when he runs into his eighteen-year-old guardian, Riley Pendare, he learns that he's really in the eighth day—an extra day sandwiched between Wednesday and Thursday. Some people—like Jax and Riley—are Transitioners, able to live in all eight days, while others, including Evangeline, the elusive teenage girl who's been hiding in the house next door, exist only on this special day.
And there's a reason Evangeline's hiding. She is a descendant of the powerful wizard Merlin, and there is a group of people who wish to use her in order to destroy the normal seven-day world and all who live in it. Torn between protecting his new friend and saving the entire human race from complete destruction, Jax is faced with an impossible choice. Even with an eighth day, time is running out.
Opening Lines: "Jax pedaled home from the store and muttered in cadence with the rhythm of his bike wheels: This sucks. This sucks. This sucks."

Great Stuff: This is truly a fast-paced book which I couldn't put down. It starts with a mystery: after Jax's father's death, why is Jax no longer living with his his aunt Naomi? Why is Riley Pendare, a teenager whom Jax despises, his new guardian? And what did Riley say to Aunt Naomi and the lawyer to make them change their minds?

I loved the character arc, in which Jax little by little begins to understand his situation. I loved the interweaving of Arthurian legend, and the fantastic world Dianne Salerni creates, with Transitioners and Kin, and the mysterious Eighth Day. And the final battle atop a Mexican pyramid is a heart-stopper.

About Dianne: Dianne K. Salerni is a felllow member of Project Mayhem, my middle grade group blog. She teaches 5th grade in Pennsylvania, as well as writing novels such as The Caged Graves. I thought it would be fun to interview her--and I was right! Take it away, Dianne!

I’ve long had an interest in Arthurian legend. I can’t say that I have a favorite, but what I really enjoy is seeing the legends retold in new and surprising ways. (For example, I read an early draft of Camelot Burning, an Arthurian steampunk novel by Kathryn Rose. Highly recommended!)
To be honest, when I started planning The Eighth Day, Arthurian legends weren’t part of the story at all. Then, while researching something else, I randomly stumbled upon the story of Merlin’s apprentice Niviane tricking him into a place of suspended time. Some versions of the tale call it an eternal forest; others describe it as a cave. There were similarities in the way this place was described and the vision I had for the eighth day. Once I’d noticed the possible connection, the idea stuck – and blossomed.
This is my debut as a middle grade author. It’s strange that I waited so long to write a book for this age group, since I’m a fifth grade teacher.
Working with my editor, Alexandra Cooper, and her assistant, Alyssa Miele, has been wonderful. Originally, my book was acquired by Barbara Lalicki, and when Barbara retired, it was a few months before I was assigned a new editor – and I had a lot of time to worry if the new editor would love my book as much as Barbara did.
But Alexandra was great to work with. We went through several rounds of revision, and boy, did she make me work hard! But she got a better book out of me, and when I submitted my second manuscript to her, I couldn’t wait to receive her editorial notes. I trusted that her instincts would pinpoint the strengths and weaknesses of my story and help me take it to a higher level.
Without question, I would swear my allegiance to Riley. I know he doesn’t make a good impression at first, but Jax has reason to resent Riley in the beginning. We get a biased view of him. He’s not perfect, certainly, and he’s only 18 and inexperienced at leadership. However, by the end of the book, I think he’s someone worth following.
I am in no way a military strategist! Originally, I planned the scene based solely on books, photographs, and YouTube videos of people who filmed themselves climbing the Pyramid of the Sun. For military expertise, I called on my brother-in-law, who’s a retired federal agent with combat experience. He laid out basic strategies for me, and I wrote the scene. Afterward, I sent him the chapters to read, and he let me know where I needed to tweak them.
But I worried a lot about writing all this based on the photographs and videos of strangers, so my husband said, “Let’s go to Mexico.” And we did! I can’t tell you how amazing it was to visit Teotihuacan after writing the book – and best of all, to discover that my scenes worked in that setting!

There are many days when it’s really hard to juggle those things. I’ll have schoolwork to do when I want to be writing. I’ll have emails from my editor I want to answer when I have a class to teach. Sometimes, I wonder why my family tolerates me when I’m holed up in the basement, writing and ignoring them.
In February and January, we lost a lot of school days to snow, ice, and power outages. We no longer have a spring break, and we might be going to school in July, but I used the days to make significant progress on the draft for Book 3 in the series. So for me, it was a blessing.
Three books are planned, with the option for more if the series is successful. My editor and I completed revisions on Book 2, The Inquisitor’s Mark, in January. I’m hoping to get Book 3 written before The Inquisitor’s Mark boomerangs back from copy-editing.
Book 2 is tentatively scheduled for release in the Winter of 2015, and I think Book 3 will come out late that same year. No movie deals yet, but my agent is in contact with a Hollywood film agent with plans to shop it around.
Michael, thanks so much for having me here at your blog. I am thrilled that you enjoyed The Eighth Day!

My pleasure, Dianne!! I wish you every success with the publication of The Eighth Day.
Posted by Michael G-G at 2:30 AM