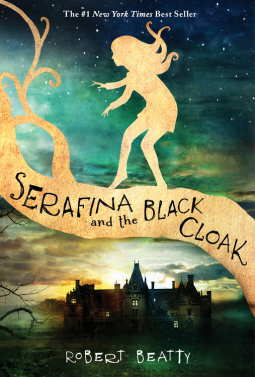 SERAFINA AND THE BLACK CLOAK by Robert Beatty (Disney Hyperion, 7/14/15)

What It's About (from the Netgalley description):
"Never go into the deep parts of the forest, for there are many dangers there, and they will ensnare your soul."

Serafina has never had a reason to disobey her pa and venture beyond the grounds of the Biltmore estate.There's plenty to explore in her grand home, although she must take care to never be seen. None of the rich folk upstairs know that Serafina exists; she and her pa, the estate's maintenance man, have secretly lived in the basement for as long as Serafina can remember.

But when children at the estate start disappearing, only Serafina knows who the culprit is:a terrifying man in a black cloak who stalks Biltmore's corridors at night. Following her own harrowing escape, Serafina risks everything by joining forces with Braeden Vanderbilt, the young nephew of the Biltmore's owners. Braeden and Serafina must uncover the Man in the Black Cloak's true identity before all of the children vanish one by one.


Serafina's hunt leads her into the very forest that she has been taught to fear. There she discovers a forgotten legacy of magic, one that is bound to her own identity. In order to save the children of Biltmore, Serafina must seek the answers that will unlock the puzzle of her past.

Opening Lines:
"Serafina opened her eyes and scanned the darkened workshop, looking for any rats stupid enough to come into her territory while she slept. She knew they were out there, just beyond her nightly range, crawling in the cracks and shadows of the great house's sprawling basement, keen to steal whatever they could from the kitchens and storerooms. She had spent most of the day napping in her favorite out-of-the-way places, but it was here, curled up in the old mattress behind the rusty boiler in the protection of the workshop, that she felt most at home."

Doesn't this sound like a total creep fest? I can't want to get my teeth into it when it publishes next week. And the cover is fantastic! I think this book is going to be BIG!

I put Robert through the usual Mafioso questions, and he handled himself with aplomb. Here we go:

1) Who are your favorite (middle grade) writers?
JRR Tolkien (The Hobbit)
T.H. White (The Once and Future King)
Roald Dahl (Matilida, etc.)
Elizabeth George Speare (The Witch of Blackbird Pond)

2) What's on your nightstand now?
The Man Who Planted Trees (which I’m re-reading for the millionth time. Love this French folk story)

The Night Gardener (MGM: Yay for yet more creepy stories like Serafina and The Black Cloak!)

3) Pick a favorite scene from your novel, and say why you like it:
One of my favorite scenes in Serafina and the Black Cloak is when Serafina must ride in a carriage for the first time. She’s with a boy named Braeden Vanderbilt, known as the “young master” at Biltmore Estate. Serafina has much to tell Braeden and wants to trust him, but doesn’t know if she should. Calamity strikes and they must spend the night in the carriage together, fending for themselves against the darkness of the forest where the carriage has stopped. I love the spookiness of it, and the sense of togetherness—two new friends against the world.

5) My favorite breakfast is…
Homemade pancakes made by my daughters using eggs from our chickens and blueberries and strawberries from our garden. (MGM: I'll be right over!)

6) If you could visit any place, where would it be?
I have traveled all over the world and really enjoy it. Lately, I’ve been keen to see Vienna and the mountains of Austria. Also, I’ve been to England multiple times, but I long to spend more time there.
(Well, dear readers, as you know England is my country of origin--so Robert has very good taste.)

Robert Beatty lives in the Blue Ridge Mountains of Asheville, North Carolina with his wife and three daughters, who help create and refine his stories. He loves to explore the grand Biltmore Estate and the darkened forest trails where his novels take place. Robert’s Disney Hyperion novel Serafina and the Black Cloak will go on sale July 14, 2015. He writes full-time now, but in his past lives, Robert was one of the early pioneers of cloud computing, the founder/CEO of Plex Systems, the co-founder of Beatty Robotics, and the chairman/CTO of Narrative Magazine. In 2007, he was named an Entrepreneur of the Year. Answering a question about the inspiration for his book, Robert said, “Serafina’s journey grew out of my desire to write a story about an unusual and heroic young girl for my three daughters.”

Robert Beatty has one of the most arresting websites I've come across--it's just beautiful. You can visit it HERE, as well as Like Serafina and the Black Cloak on Facebook and follow Robert Beatty on Facebook. He Tweets @BeattyAuthor.

Comment to enter to win a copy of SERAFINA AND THE BLACK CLOAK from the publisher (US addresses only, please.)

Breaking News: SERAFINA AND THE BLACK CLOAK's book trailer has just gone LIVE: watch it here. (Warning: it is gorgeous...)

Hope everyone had a good 4th of July. It was fireworks on the beach for me and the rest of the Mafiosi. Ciao!