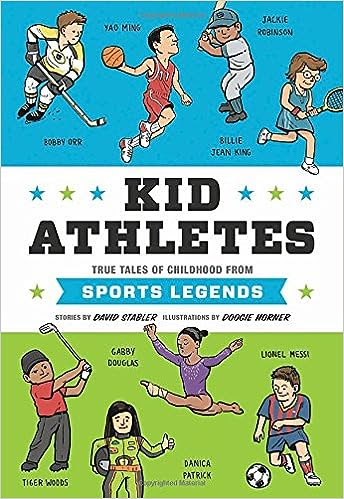 Honestly, I don't read much nonfiction, but when this came up for review I jumped on it. Why? Because my youngest son is completely enraptured by basketball, and the Portland Trail Blazers in particular. Now that he's in 3rd grade, this was a perfect book for us to share as a read aloud, with he doing his fair share.

What It's About (from Goodreads):
The author and illustrator of Kid Presidents have reteamed to share 20 true tales from the childhoods of famous athletes. From Babe Ruth (so incorrigible that his parents put him in reform school at age 7) to Muhammad Ali (who learned to fight at age 12 after a thief stole his bicycle), Kid Athletes is packed with inspirational stories from the world of sports. Billie Jean King rose from modest circumstances to win 39 Grand Slam championships; race car champion Danica Patrick fended of bullies who told her "girls can't drive"; and martial arts legend Bruce Lee credited his success, in part, to childhood dance lessons. Every goal, touchdown, and championship comes to life in these kid-friendly and relatable stories, all with Doogie Horner’s whimsical full-color illustrations. Kid Athletes is a slam dunk for young sports fans everywhere.

Why We Liked It:
The stories are well told. Most of them start with the fact that the kid athlete was undersized or had some challenge. (This particularly resonated with my not-particularly tall son.) There is a good mix of male and female athletes, as well as several from other countries (Yao Ming, Lionel Messi). And it's not only the usual sports that are featured.  There's sumo wrestling (Jesse Kahaulua) and horse racing (Julie Krone).

I also enjoyed the humor of the illustrations. The book feels good in one's hands and the graphic design is appealing. There is also suggested further reading in the back, which I'm sure would be appreciated by teachers and librarians.

Bottom line: my son and I enjoyed this a lot. We are now on the lookout for the other collaboration by David Stabler and Doogie Horner: Kid Presidents. (Also, there's a rumor of a new book in the series: Kid Artists.) Count me in as a fan!

P.s. I've been very slothful on the blog this year, especially the past few months when I have been underwater as one of the 1st round Cybils' panelists. But that journey soon is ended, and the good news is that I should have a bunch of novels to fawn over and praise come the New Year. Thanks for hanging in with me through thin and even thinner!