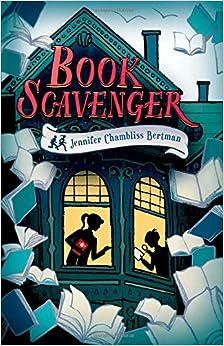 What It's About (via Goodreads):
Twelve-year-old Emily is on the move again. Her family is relocating to San Francisco, home of her literary idol: Garrison Griswold, creator of the online sensation Book Scavenger, a game where books are hidden all over the country and clues to find them are revealed through puzzles. But Emily soon learns that Griswold has been attacked and is in a coma, and no one knows anything about the epic new game he had been poised to launch. Then Emily and her new friend James discover an odd book, which they come to believe is from Griswold and leads to a valuable prize. But there are others on the hunt for this book, and Emily and James must race to solve the puzzles Griswold left behind before Griswold's attackers make them their next target.

Opening Lines:
"Garrison Griswold whistled his way down Market Street, silver hair bobbing atop his head like a pigeon wing. He tapped his trademark walking stick, striped in Bayside Press colors, to the beat of his tune."

Things to Love:
Book Scavenger was another middle grade Cybils finalist, and it's very easy to love. Bertman has come up with a super concept--a book scavenger hunt--and who among us didn't love clues and ciphers and treasure hunts when we were young? (I mean, some of us may still do!)

The setting--in San Francisco, one of my favorite cities--is great. (There's even a chase down Lombard Street. How cool is that)

Book Scavenger reminded me a little of Escape from Mr. Lemoncello's Library, but I found the friendship between Emily (the main character), and her neighbor James to be better drawn than in the latter title. Bertman does a great job of describing what it feels like for a 12-year-old to be moving all over the country and the loss of stability that engenders.

Also, if you're a Poe fan, you will really enjoy all the Poe details and allusions. I can't wait to read the sequel (which is scheduled for January 2017!)

About The Author (from website):
Jennifer Chambliss Bertman writes stories with a bit of mystery, a bit of humor, and a lot of fun. Her debut novel, Book Scavenger (Christy Ottaviano Books/Henry Holt for Young Readers), was an Indie Next Kids’ Top Ten Pick, a Junior Library Guild selection, and one of five titles chosen for Publisher’s Weekly Best Summer Middle Grade Books for 2015, among other accolades. A sequel titled The Unbreakable Code will be published in 2016, followed by a stand-alone middle grade mystery in 2017. She has an MFA in creative writing and worked in publishing for over a decade before becoming a children’s book author.