ADDISON COOKE AND THE TREASURE OF THE INCAS by Jonathan W. Stokes 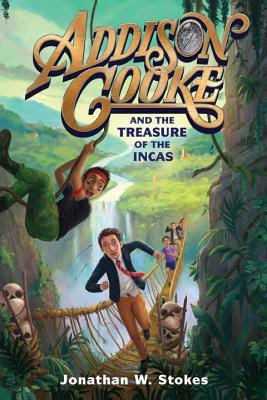 ADDISON COOKE AND THE TREASURE OF THE INCAS by Jonathan W. Stokes (Philomel, October 11th, 2016)

This is hot off the presses--and I'm part of a select blogging group who are featuring it this week. Other participants are:

What It's About (via Goodreads):
Smooth-talking, refined twelve-year-old Addison Cooke loves a grand adventure, especially one that involves using his vast knowledge of history and archaeology, learned from his aunt and uncle, both world-famous researchers. If that adventure includes an expertly-knotted Windsor tie and an Arnold Palmer on the rocks, all the better.

Luckily for Addison, adventure has a way of finding the Cookes. After Addison's uncle unearths the first ancient Incan clue needed to find a vast trove of lost treasure, he is kidnapped by members of a shadowy organization intent on stealing the riches. An expert in Incan history, Addison's uncle is the bandits' key to deciphering the ancient clues and looting the treasure. . . unless Addison and his friends can outsmart the kidnappers and decipher the clues first. So it's off to Peru (business class, no less), across the Amazon, and all the way to Machu Picchu in a race for riches and history.

First Lines:
Addison Cooke sat cross-legged in the school library, engrossed in an Incan history book. Under the spell of a decent read, Addison could forget meals, forget sleep, and even forget to go to class."

Here's The Scoop:
This is a helter-skelter ride of a novel, with chase after chase. (I keep thinking, as I was reading, what a great movie it would be.) There are evil archaeologists complete with a gang of Russian henchmen; Ecuadorian gangsters; and caimans--South American alligators--just dying to take a bite out of you. There are spills and scrapes aplenty, and the '86-ers' (named after the street they live on in New York City) are up to the challenge. Jonathan Stokes does a great job of bringing his kid characters to life, giving each of them recognizable quirks. Addison comes across as a bit of an English gentleman from bygone days, and is quick on his feet. Molly, his sister, is a speedy sportswoman. Eddie is a bit nervous, but is invaluable for his Spanish skills, and Raj is a highly decorated Boy Scout and survival camp veteran with a brown belt in karate.

The plot hinges on deciphering the three keys that will lead to the hidden Incan treasure (which is based on a legend.) I enjoyed the setting and getting to learn some details of Incan history at the time of the conquistadores. This is a fun, fun read that really hits the middle grade adventure sweet-spot. (Oh, and the cover's tremendous too!)

About The Author:
Jonathan Stokes is a screenwriter living in Los Angeles. He has written on assignment for Fox, Paramount, Universal, Warner Brothers, New Line, and Sony. He is the author of several upcoming kids' books being published by Penguin Random House. Jonathan is a street taco aficionado, an urban explorer, and koala enthusiast. WEBSITE  TWITTER

Email ThisBlogThis!Share to TwitterShare to FacebookShare to Pinterest
Labels: Addison Cooke and the Treasure of the Incas; blog tour