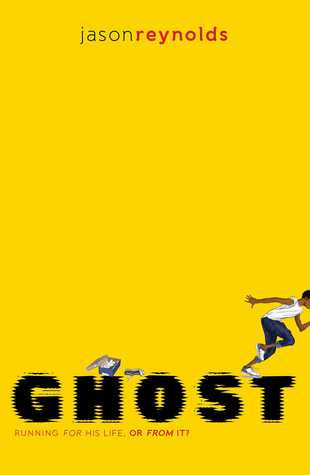 Another great "sports" book. (And a middle grade finalist for this year's Cybils award.)

What It's About (via jacket copy):
RUNNING. That's all that Ghost (real name Castle Cranshaw) has ever known. But never for a track team. Nope, his game has always been ball. But when Ghost impulsively challenges an elite sprinter to a race--and wins--the Olympic medalist track coach sees he has something: crazy natural talent. thing is, Ghost has something else: a lot of anger and a past that he tries to outrun. Can Ghost harness his raw talent for speed and meld with the team, or will his past finally catch up to him.

Opening Lines:
Check this out. This dude named Andrew Dahl holds the world record for blowing up the most balloons... with his nose."


About The Author:
Jason Reynolds earned a BA in English from The University of Maryland, College Park. His novels include All American Boys (written with Brendan Kiely), The Boy in the Black Suit (both which were Coretta Scott King Honor books; When I was the Greatest, which won the 2015 Coretta Scott King/John Steptoe Award for New Talent; and As Brave As You. He lives in Brooklyn, New York,