The funny thing is, when I first arrived in Portland Oregon in 1990, I neither thought she lived in Oregon or that she was even alive.

Why? Chalk it down to a youthful bias that all writers worth reading were no longer with us. (Don't ask me where I got this silly notion. I was an unsophisticated child.) I had, however, picked up a copy of Le Guin's A Wizard of Earthsea in the school library in my British boarding school. I think it was one of the first books that made me want to be a writer.

I was entranced by that story. I fancied myself Ged, the apprentice wizard. The scene where Ged makes a tremendous mistake because of arrogance and envy, costing the life of the Arch-Mage, shook me to my core. It is a scene I have never been able to shake.

Fast forward twenty years. I had moved to a new country and was enjoying the bookish life of Portland. My wife and I attended a fundraiser for the local public radio station and who was one of the presenters? No other than the legendary Le Guin, very much alive. I was too shocked and too shy to speak with her.

I reread the Wizard of Earthsea a number of years ago. It has lost none of its magic.

A few weeks ago, I came across Le Guin's latest, a collection of her blog posts, No Time to Spare: Thinking About What Matters. I started to read it, once again thrilled by the tautness of her prose and the expansiveness of her mind. "I'd love to meet her," I told my friend Jared over tea. "Come to my neighborhood," he replied. "She lives there. In fact, I could hit her house with a frisbee."

I never got to visit, or to throw a frisbee at Ursula Le Guin's house. Three days later, while I was reading her reflections on aging, the news came that she was dead at the age of 88. 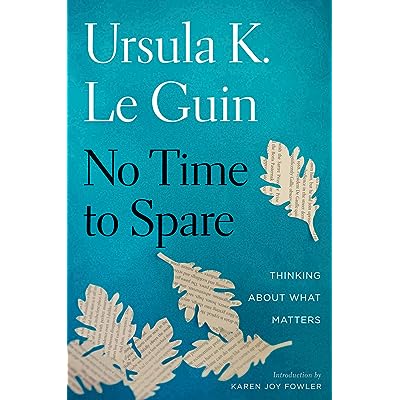 Here is a piece from the essay 'In Your Spare Time':

"The opposite of spare time is, I guess, occupied time. In my case I still don’t know what spare time is because all my time is occupied. It always has been and it is now. It’s occupied by living.

An increasing part of living, at my age, is mere bodily maintenance, which is tiresome. But I cannot find anywhere in my life a time, or a kind of time, that is unoccupied. I am free, but my time is not. My time is fully and vitally occupied with sleep, with daydreaming, with doing business and writing friends and family on email, with reading, with writing poetry, with writing prose, with thinking, with forgetting, with embroidering, with cooking and eating a meal and cleaning up the kitchen, with construing Virgil, with meeting friends, with talking with my husband, with going out to shop for groceries, with walking if I can walk and traveling if we are traveling, with sitting Vipassana sometimes, with watching a movie sometimes, with doing the Eight Precious Chinese exercises when I can, with lying down for an afternoon rest with a volume of Krazy Kat to read and my own slightly crazy cat occupying the region between my upper thighs and mid-calves, where he arranges himself and goes instantly and deeply to sleep. None of this is spare time. I can’t spare it. What is Harvard thinking of? I am going to be eighty-one next week. I have no time to spare."

Email ThisBlogThis!Share to TwitterShare to FacebookShare to Pinterest
Labels: A Wizard of Earthsea, No Time to Spare, Ursula K. Le Guin