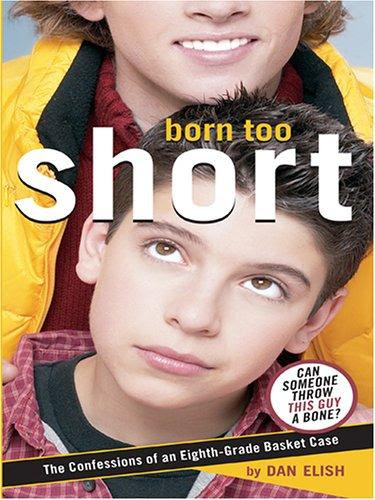 Born Too Short: The Confessions of an Eighth Grade Basket Case by Dan Elish (Atheneum, 2002)

What caught my eye first: The title. And man, who wasn't a basket case in 8th grade?!

The story (thanks to Amazon's copywriters):
What do you do if your best friend is Keith Livingston? Keith -- who practically needs a chart to keep track of his babes. Keith -- the stud/athlete/Adonis of Hannaford School in New York City.
Well, for starters, if you're like Matt Greene, a 5'1" nerd who has never made out, you suffer.
When Keith's eighth-grade musical, Star Crossed, is a smash, Matt can't take it anymore. Blowing off steam on the corner of Eighty-first Street and Columbus, he wishes his buddy's life would fall completely apart.
Sound serious? As Matt's story shows, the insane, gut-wrenching jealousy of a non-stud/non-athlete/non-Adonis basket case can be wildly funny.

Wonderful thing about this book: Elish does a great job with teen-speak. Also, I totally believed the feelings of jealousy Matt had for his best friend, Keith. After all, Matt wants to have all the girls adoring him. But with Keith around, it's not going to happen.


Caveat: I prefer my middle grade on the "upper/tween" side, and this one certainly fits the bill. Personally, I'm not a prude, and I know that teens are getting up to some devious stuff, but it might concern some readers that Matt drinks a couple of beers at a party (without too much of a consequence, I might add--the kid doesn't even seem to have much of a hangover), and that there are a couple of references to things like "whacking off" and other sexual stuff. I'd say this would be a good one for 7th-8th graders, and it wouldn't be a bad thing to read it with your child and use it to discuss views on teen drinking and sex.
If you want to learn more about Dan Elish, here's his website. He sounds like a multi-talented sort of fellow.
(I'll be making a mid-week announcement about a very exciting MMGM for next Monday--so keep your Google Reader in top working order!)
Posted by Michael G-G at 3:00 AM