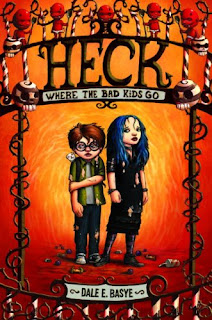 The Heck books have been around a while--in fact, I think #6 has just been published. I saw the author at the recent 90-second Newbery festival, and he was as funny as all get-out. I decided to give HECK a shot.

The Story (via Goodreads): When Milton and Marlo Fauster die in a marshmallow bear explosion, they get sent straight to Heck, an otherworldly reform school. Milton can understand why his kleptomaniac sister is here, but Milton is—or was—a model citizen. Has a mistake been made? Not according to Bea “Elsa” Bubb, the Principal of Darkness. She doesn’t make mistakes. She personally sees to it that Heck—whether it be home-ec class with Lizzie Borden, ethics with Richard Nixon, or gym with Blackbeard the Pirate—is especially, well, heckish for the Fausters. Will Milton and Marlo find a way to escape? Or are they stuck here for all eternity, or until they turn 18, whichever comes first?

"In Generica, Kansas, Christmas wasn't something you felt in the chill of the winter air or the warmth of a generous smile. It was announced by the sixteen-foot tower of crystal angels at Grizzly Mall--the Mall of Generica."

What I Thought: This was downright funny, clever, and gross--classic middle grade, in other words. There's a bunch of very inventive word play, particularly with names. There are "hall demonitors" and other freaky creatures of Heck. Principal Bea "Elsa" Bubb is horrid, and there are several utterly disgusting descriptions of trudging through the sewers of Heck. (Not for the squeamish.)

I also loved the cover art, the drawings above each chapter heading (illustrations by Bob Dob--can this be a real person? I guess so) and the fact that one of the heroes is a ferret called Lucky.

About the Author: (From the back cover) Dale E. Basye lives in Portland, Oregon, as part of the criminal witness-relocation program, where he lives every day in fear that he will be discovered... oh, poop. (Me: He also has a great website.)