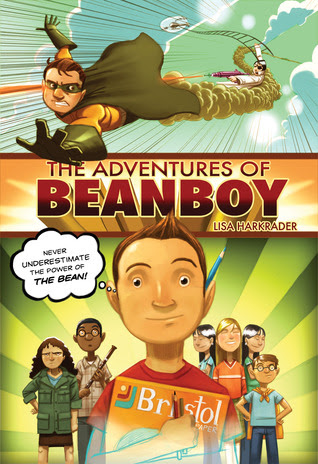 THE ADVENTURES OF BEANBOY by Lisa Harkrader (Houghton Mifflin Harcourt, 2012)

The last of the Cybils' finalists I'll be featuring, this one was unknown to me before I read it. I'm glad someone had the sagacity to nominate it, and that the first round panelists saw fit to place it in the final seven.  It's a good read, and the illustrations (plus cover) are great.

The Story: Never underestimate the power of the bean. Tucker MacBean has been drawing comic books almost as long as he’s been reading them. When his favorite comic has a contest for kids, he hopes he has finally found a way to fix his family—all he has to do is create the winning superhero sidekick . . . Introducing “Beanboy”—the first comic book character to truly harness the power of the bean for good. He is strong, he is relentless, he can double in size
overnight (if given enough water). (Goodreads blurb)

What I liked: This is classic middle grade. Tucker's a likable character, with a fine, bassoon-playing sidekick--Noah. He has a younger brother, Beecher, who is developmentally delayed (and whom he loves and yet feels frustration about); a dad who has left the family; and a mom who is absent because of constantly having to work, as well as study for college, because of this. There's a nemesis at school--a girl called Sam Zawicky, who seems full of rage--and a popular girl, Emma, who is also nice. It's a believable exploration--without ever becoming preachy--of having to deal with a broken family and consequent lack of money. It also has a lovely vein of humor running through it.

And: "The whole school would hate me. Including Emma. I doubted even Noah would talk to me. Nobody would. Probably not even the teachers. I'd have to be homeschooled. Except since I'd be the only one home, I'd have to homeschool myself."

The whole writing comics thing is skilfully done, and Lisa Harkrader's drawings are great. This would be a great novel to hand to a reader who might struggle with something too text heavy. As the Kirkus review said, "With a full comic adventure that includes a farting superhero, this is an excellent recommendation for kids transitioning between graphic novels and traditional books."

About the Author: Lisa Harkrader is from Kansas, and has written a number of non-fiction books, as well as the well-received novel AIRBALL: MY LIFE IN BRIEFS. You can learn more about her at her website
Posted by Michael G-G at 2:30 AM