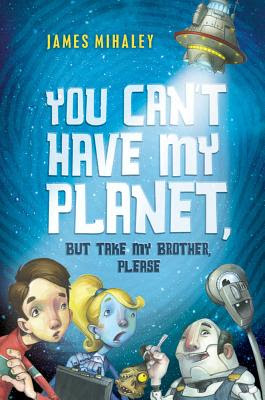 I'm thrilled today to be interviewing one of my Project Mayhem mates, James Mihaley. (Project Mayhem is my group blog and, if you haven't visited it yet, you should do yourself a favor and pop on over. We're one of the best group blogs out there, and always up for a bit of middle grade mayhem.).

Anyway, James is one of our newer members. He has an awesome novel out, and the paperback edition has just been released. In honor of that wonderful event, he's going to be giving away a signed copy to one lucky commenter!!!

Here's a little something about his debut novel (which is a hoot--just as James is).... YOU CAN'T HAVE MY PLANET, BUT TAKE MY BROTHER PLEASE (Feiwel and Friends, 2012): Thirteen-year-old Giles is the last person anyone would expect to save the planet. He’s not as charming as his little sister, and not as brainy as his goody-goody older brother. But when Giles witnesses an alien realtor showing Earth to possible new tenants, he knows he’d better do something. With the help of an alien “attorney” and the maddest scientist in middle-grade fiction, Giles just might save humans from eviction from Earth. Let’s hope so. The alternatives are . . . not so hospitable.

My Interview with James:

1) Your agent sold your novel in one day. How did that happen, and how did you keep yourself from joyfully launching into outer space?

I did launch into outer space.  I was up there for a month and a half.  I spent all my advance at a night club on Jupiter.  Believe me, it was worth it.
Getting serious for a moment, (I promise just a moment, I give you my word of honor), when I wrote the book I didn’t have an agent.  Upon completion, I sent my ms to Rosemary Stimola.  Rosemary called me on a Monday, said she wanted to represent me.  She said she knew someone at Macmillan who might be interested.  She asked me if it would be all right for her to submit it.
I said, “HELL YES!”
The next day, Tuesday, she sent the book over to Macmillan.  On Wednesday, Rosemary called me with the news that we sold it!
And check this out.  I had submitted the book to two other agents when I sent it to Rosemary.   I got rejections slips from those agents after I sold the book, telling me they didn’t think it would sell!!!!!!!!!!!!!!!
Therefore, if you get a rejection from an agent or two, it means absolutely nothing!!!!!  Do not be deterred!!!!!!! (Michael said I’m only allowed to use 836 exclamation points in this Q&A.  I think I’ve already reached my quota.) [That you have, James--but I have several hundred more that I'm hording for myself!!!!]

2) As well as being a writer, you're a professional hip hop dancer and choreographer. How long have you been writing and dancing?
As we all know, there is a God of Writing and there is a God of Dancing.  Some people say the two gods don’t like each other that much.  On the Mount Olympus of Creativity, there is also a third deity, the God of Writing & Dancing.  He looks like a dwarf but has very long wings.  He got his head stuck in a jar of honey one day outside a supermarket in Bakersfield, California.  I helped him get it out.  He rewarded me with a wave of his magic wand.  Presto.  I became a writer and a dancer.

3) I know that particular God too, but he only allows me to do the cha-cha with two left feet. Oh well... Back to being serious...What piece of writing advice would you have loved to have been given, starting off?

To not place so much pressure on yourself with a first draft.  When we’re starting out, I think we have a tendency to try and perfect every sentence, right from the opening paragraph.  The danger of that approach is that we may end up discarding the exquisitely chiseled opening once we get into the book and find out what it’s truly about.  With the first draft, it’s all about getting ink on paper, black on white.  Just let it rip.  Then, put it down for a week, let it breathe, pick it up and evaluate its strengths and weaknesses.
Your ability to accurately evaluate the merits of your work increases dramatically when you put it down and let it breathe.  I wish I’d known that at the beginning.

4) I totally agree! Now for some gossip: I've heard that hummingbirds love you. Do they descend upon you, kind of like Hitchcock's The Birds? How long has this been going on?

My bond with hummingbirds is peaceful and exhilarating.
It began a few years ago when I spotted a hummingbird’s nest in a bougainvillea outside my bedroom window.  So tiny and magical.  Mother hummingbird was sitting on her eggs in the moonlight.  A month later, in another part of the Los Angeles, a hummingbird flew into my car when I was getting ready to start it up.  We hung out together in the car for a couple of minutes, me and the hummingbird.  Quite an experience.  And quite true.

5. One last thing I've been wondering about, James. In the back of your newly released paperback, there’s a Q&A.  It talks about you being a robot.  What’s all that about?

I am a robot.  Just kidding.  Not really.  The truth of the matter is that my skills as a dancer enable me to move exactly like a robot.  I decided to use that to create a movie to help promote ‘You Can’t Have My Planet But Take My Brother, Please’.  The movie will be coming out this summer on You Tube.  It’s called ‘The JimBot’.

Here’s the premise of the film: What if it turns out that ‘You Can’t Have My Planet’ was the first book in history written by a robot?  What if children’s author, James Mihaley, is actually a robot in disguise?  In the movie there’s an investigative journalist who wants to reveal to the world that I’m a robot and win a Pulitzer prize.  I have a nosy neighbor (MGM: not me, I swear!) who has proof that I spark in the rain.
The film is hilarious.  Plus it has a beautiful theme promoting non-violence.

It was directed by Mike Pedraza, who is an editor on the 150 million dollar Matt Damon movie coming out this summer.  Mike’s wife, Donna Pedraza, produced it.

Here is an illustration from the movie done by Austin Jones.  It’s me as a baby robot.
When the JimBot comes out this summer, I’ll be sure to let you know! 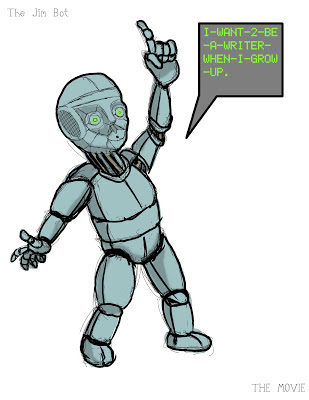 Thanks so much for the great interview, James. If you're ever in MG Mafioso land, look us up. The Don loves dancing (and accordion-playing!), so it might be quite a party.

Once again, guys, leave a comment to be eligible for a signed copy of YOU CAN'T HAVE MY PLANET, BUT TAKE MY BROTHER PLEASE. And happy reading!!