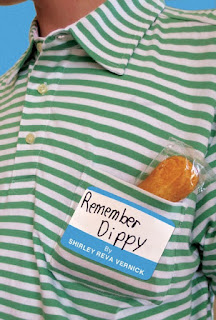 The Story: Johnny's plans fly out the window when he finds out his single mother is leaving town for the summer. She has a breakthough job in upstate New York. He can live with his Aunt Collette but only on the condition that he "help out with" his autistic older cousin, Remember. Yup, you heard it right: Remember Dippy. That's his cousin's name—and Remember is a gawky awkward kid with some pretty strange habits, like repeating back almost everything Johnny says and spending hours glued to the weather channel. Johnny's premonitions of disaster appear at first to come to cringeworthy fruition, but when the two boys save a bully from drowning, salvage the pizzeria guy's romance, and share girl troubles, Johnny ends up having the summer of his life.

"Hull, Vermont, should be named Dull, Vermont. More cows than houses. No mall, no roller rink, not even a mini-putt. So I knew my last summer before high school was going to be a boring one like all the others. What I didn't know was that it was going to be a rotten summer."

I pretty much say it about all the books I like: VOICE. By this I mean that the voice (the outlook, the word choices) of the main character, Johnny, is spot on. Johnny would much rather hang with his friends, Mo and Reed, than with his cousin Remember ("Yes, that's right, his name is Remember--straight out of some New Age baby-naming book.") Remember (or Mem, as Johnny calls him) is on the autistic spectrum and does indeed have several habits that would exasperate a neurotypical teen. Mem repeats parts of what others say; he throws tantrums when he feels he can't control what's happening in the world around him. But he is also sweet. Therefore, while Johnny views his neighbor, Mr. Boots, as a "cranky old man," Mem calls him his best friend. Mem also doesn't get rattled by the boy whom Johnny can't stand, Dirk Dempster. In the end, it's Mem who teaches Johnny acceptance.

Cast of Characters: There's actually a lot going on in this novel. Johnny's Aunt Collette, who is Mem's mom, and with whom Johnny's spending the summer, has a suitor. Niko, who owns the pizza parlor in town, has lost the engagement ring he wanted to present his girlfriend. There's a girl, Leesha, visiting from Chicago who actually likes it in Hull and doesn't want to return home. (Mem, of course, befriends her.) Dirk Dempster has a rotten home life, but he and Johnny come to an uneasy truce. There are rescue ferrets. And Johnny and his pals end up helping (and growing to appreciate) Mr. Boots after he falls and breaks a leg.

Humor: Yup, there's a lot to laugh about. Middle school boys playing mini golf with... hard boiled eggs?! "So that's how we invented a new sport called Egg Whack. Mo actually wanted to call it Egg Roll, but Reed and I vetoed it on the grounds that it sounded like Chinese take-out." There are haircut disasters: "Who was this alien with the spikes and poufs staring back at me...? I looked like a rock star on a bad hair day, only worse."
But I think my favorite line is near the end, when the kids have pulled off something major and Johnny says "For a terrifying moment, I thought we were going to have a group hug. Leesha put both arms out, and Mem started leaning in--but I was saved by the bell. The doorbell, that is." See what I mean about voice?!

In conclusion, REMEMBER DIPPY doesn't have a huge promotional budget. It's being published by a small press (more on that later). But it was definitely one of the more endearing novels I've read in a while, and I would encourage you to seek it out. Middle Graders will find the attitudes and experiences of the novel ring very true to life.

About the Author (from Amazon): Shirley Reva Vernick's debut novel The Blood Lie was named on the 2012 Best Fiction for Young Adults list from the American Library Association. It also received the Simon Wiesenthal Once Upon a World Children's Award and Sydney Taylor Honor Book Award. Shirley lives with her husband, two daughters, and two frisky dogs in western Massachusetts. In addition to running a popular storytelling website—storybee.org—Shirley has written for Cosmopolitan, Good Housekeeping, Ladies' Home Journal, national newspapers, and the publications of Harvard, Johns Hopkins, and Boston universities.

About Cinco Puntos Press: I would invite anyone who is interested in small presses to visit the Cinco Puntos website. The publishers, Lee and Bobby Byrd, talk about publishing as a voyage of discovery. And one of their authors, Benjamin Alire Sáenz, was recently awarded  the 2013 PEN/Faulkner Award for Fiction for his book Everything Begins and Ends at the Kentucky Club!

Thanks for stopping by, and have a Marvelous Middle Grade Monday and Wonderful Reading Week.