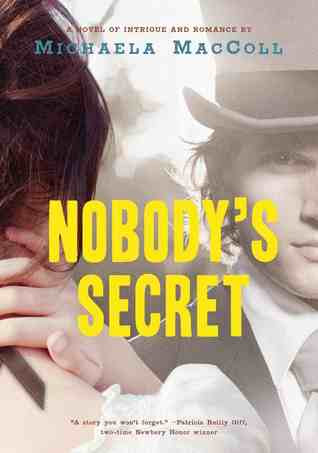 Today I have the great pleasure to kick off the blog tour for Michaela MacColl's new novel, Nobody's Secret. This is--wait for it--a murder mystery starring a teen Emily Dickinson. Let me say that it is a tremendous historical novel, for all of you historical devotees. Emily is totally spunky; the identity of the murderer is not guessed at until very near the end--and the writing is topnotch and engrossing. I was lucky enough to get to interview Michaela, and am even luckier to be able to send a hardback, hot-off-the-presses copy to one lucky commenter.

Here's the blurb from Goodreads:
One day, fifteen-year-old Emily Dickinson meets a mysterious, handsome young man. Surprisingly, he doesn't seem to know who she or her family is. And even more surprisingly, he playfully refuses to divulge his name. Emily enjoys her secret flirtation with Mr. "Nobody" until he turns up dead in her family's pond. She's stricken with guilt. Only Emily can discover who this enigmatic stranger was before he's condemned to be buried in an anonymous grave. Her investigation takes her deep into town secrets, blossoming romance, and deadly danger. Exquisitely written and meticulously researched, this novel celebrates Emily Dickinson's intellect and spunk in a page-turner of a book that will excite fans of mystery, romance, and poetry alike.

Here's my interview with Michaela MacColl:

1.) Hi, Michaela. I loved PROMISE THE NIGHT, your novel about Beryl Markham--which I featured on Middle Grade Mafioso in January 2012. What draws you to characters like Beryl and Emily Dickinson?

I’ve always been drawn to interesting characters in history. I’m particularly fascinated by women, because let’s face it, there’s usually a lot holding them back.  Beryl was a girl who had to complete with boys to do what she wanted to do. Emily Dickinson lived a constricted life of a girl in the 19th century, yet she found her freedom in her independence of mind.

2.) She certainly comes across as very independent minded! Another thing I really enjoyed was that you did a magnificent job with period details (for example, the fact that Emily and Vinny are no strangers to caring for dead bodies, as they have tended to the corpses of their deceased elderly relatives.) I'm sure you read widely--but was there one particular source you found yourself going to during your research?

I usually start with biographies. There are several good ones of Emily – my favorite was called My Wars are Laid Away in Books by Alfred Habegger. But they aren’t enough. I also visited Amherst, the Emily Dickinson Museum and the Digital Archives at the Amherst Library.  The archives were probably the most fun – they have Emily’s shopping lists and bits of poems written on any scrap of paper she could find.

3.) I hope one day to get to Amherst. Perhaps the Don will increase the travel budget, hint hint... Now, about the poetry, which you weave through the novel so well... here's a confession: although I studied English Literature at university in England, I shamefacedly admit I'd never heard of Emily Dickinson until I came to live in the States. (As for The Don, his favorite poet is Hallmark.) For novices like us, what favorite poem(s) by Emily would you recommend we read?

Emily’s poems don’t have titles. She didn’t use them. Her poems are usually identified by the first line. One of my favorites (and probably the one that might appeal most to young teens) is “This is my letter to the world, That never wrote to me.” Or “Hope is a Thing with Feathers.” The thing about Emily is that she wrote about what she thought and felt and saw. Her poems have an immediacy that keeps her modern almost 150 years after her death.

4.) They sure do. Now, I hope you'll excuse this fanboy moment, Michaela, but I truthfully have to say you are becoming one of my favorite writers--and I've never thought of myself as much of a historical novel buff. What new novels do you have in the pipeline? (So I can reserve my copy...) Any more murder mysteries?

Michael – that’s so nice of you to say! Thanks so much.  And I’m glad you asked! Nobody’s Secret is the first in a series of literary mysteries. The mystery in this novel was inspired by a poem. The next one is tentatively titled Always Emily (another Emily!) and it’s about… can you guess? That’s right, Emily Bronte and her sister Charlotte. The mystery in that novel is inspired by events in Wuthering Heights and Jane Eyre.

5.) Really? I can't wait!! (I went to school in Yorkshire, not too far from the Brontes' stomping grounds.) Okay, final question: I love the way you've brought historical characters alive in your fiction. If you were to host a dinner party attended only by characters from history, who would you invite and why?

The problem with that question is that I would be too intimidated by anyone I would invite!  I’d love to meet Elinor of Aquitaine, Elizabeth I and Catherine the Great. They’re all women who defined their times instead of allowing their times to define them!

Thanks for having me at Middle Grade Mafioso – It’s always a pleasure.

Thank you, Michaela. I bet that would be a dinner party for the ages. (The Don told me to crack that pun, and he's still chortling while chomping his cigar. Groan...) People, if you want to follow the Nobody's Secret bloggers, here's where they'll be tomorrow: The YA Book Shelf. And don't forget: comment for the win!

Have a great Middle Grade Monday, and happy reading!
Posted by Michael G-G at 2:30 AM